Beam me up, Scotty

What does Beam me up, Scotty mean?

Beam me up, Scotty is a catchphrase from the television show and film series Star Trek. It can stand on its own as an allusion to the show, point out that something looks retrofuturistic, or serve as a humorous request to escape a certain situation.

Where does Beam me up, Scotty come from? 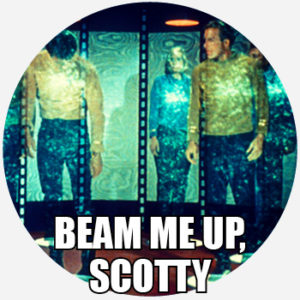 Beam me up, Scotty originates in the classic science fiction show Star Trek, although famously that exact wording was never uttered on the original 1960s show.

In Star Trek, characters “beam” up and down from their ship to various planets by means of a teleporter. Requests for the chief engineer, Montgomery Scott, nicknamed “Scotty,” to beam up or beam down are common throughout the series. The phrase Beam me up, Scotty is especially associated with Captain Kirk (played by William Shatner), the captain of the Starship Enterprise.

Heard on ABC 4 Utah: Capt Kirk is coming to town! #ComicCon in Sept in Sandy @ Expo Center. Beam me up, Scotty pic.twitter.com/QHJB07p0d5

Slang lexicographer Jonathon Green dates Beam me up, Scotty to US campus slang in the 1970s, when animated Star Trek was popular. The catchphrase was recognizable enough that it appeared in a 1975 volume of office journals from the UK Royal Aeronautical Society.

Green finds Beam me up, Scotty as a slang term for a cocaine-based drug in the 1980s and as a way to say “Give me some, drugs!” in the 1990s, with getting high likened to getting beamed up. The 1996 Star Trek novel, The Ashes of Eden, in part authored by William Shatner, was the first time the phrase appeared as such in the series franchise. That year, James Doohan, who played Scotty, titled his 1996 autobiography with the phrase, so intimately had it become associated with him.

Examples of Beam me up, Scotty

Launch of Brexit, crackdown on CEU, assault on our Department of Philosophy... Beam me up, Scotty!
@pavelgregoric, March 29, 2017 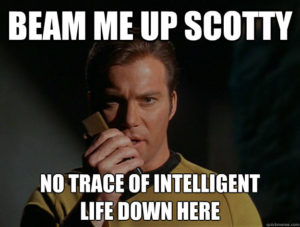 Who uses Beam me up, Scotty?

Beam me up, Scotty can be a way of literally saying “get me out of this place” or expressing rhetorical frustration with the world around you by expressing a desire for escape. Evidence for these senses, sometimes extended to “Beam me up, Scotty, there’s no intelligent life down here,” go back to the 1980s, reportedly used in difficult legal or business contexts.

Beam me up, Scotty can also reference technology that’s considered futuristic, as the article Beam me up, Scotty: The future of ablation, which appeared in the journal Science Translational Medicine suggests. Alternatively, it can suggest that something calls to mind the distinctive 1960s futurism aesthetic of Star Trek: The Original Series. It’s generally used in this sense when something looks futuristic in silly, unusual, or retro ways.

This is not meant to be a formal definition of Beam me up, Scotty like most terms we define on Dictionary.com, but is rather an informal word summary that hopefully touches upon the key aspects of the meaning and usage of Beam me up, Scotty that will help our users expand their word mastery.