What does blue balls mean?

Blue balls is a slang term to refer to a mildly painful feeling in the testicles of unrelieved sexual arousal. It can also refer to “sexual frustration” in general.

Where does blue balls come from? 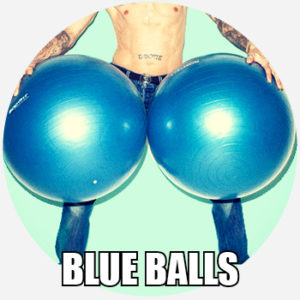 According to slang lexicographer Jonathon Green, the term blue balls for “intense sexual frustration” dates back to at least the 1910s. In the 1920s, Green notes, blue balls was also used as slang for a venereal bubo and gonorrhea.

Blue balls has since gone on to specifically describe a dull, aching sensation that occurs during sexual arousal before or without ejaculation. Medically, this is sometimes called epididymal hypertension, which causes an increase in blood pressure in men’s genital area during sexual arousal. The presence of deoxygenated blood, which is bluish in color, around the testicles during this state explains, for some, the blue in blue balls. However, the blue likely alludes to the use of the word’s meaning as “sad,” characterizing a male’s frustration when experiencing blue balls.

“A guy told me to stop acting weird once and cut it out on a second date so I gave him blue balls”
@itzWillyG Twitter (May 13, 2017)
“I feel like this whole episode is just an apology to Hammy fans for blueballing us all last week.”
Kai @daiiKaigan Twitter (May 22, 2017)
“We asked men to re-live their most traumatic, painful, and weirdly touching experiences with blue balls so we could determine whether it's real, imaginary, or going to send our boyfriends to the hospital.”
Mish Barber Way, “What Lies Beneath: Real Men Share True Tales of Blue Balls,” Broadly (October 21, 2015)
SEE MORE EXAMPLES

Blue balls has seen a number of colloquial extensions. Given its connection to unreleased sexual tension, blue balls can refer more generally to a state of horniness.

Metaphorically, blue balls is sometimes used to refer to non-sexual situations when one is frustrated by a long wait. For example, if someone has been waiting in the doctor’s office for an hour past the scheduled appointment time, they might say that the doctor is blue-balling them.

Similarly, blue balls can also playfully describe a situation when people get a taste of something they want, but not enough to satisfy them. For example, one might experience blue balls if craving a food in the middle of the night only to discover a small amount of it in the fridge.

Due to its sexual content, blue balls may be seen as inappropriate in many contexts.

This is not meant to be a formal definition of blue balls like most terms we define on Dictionary.com, but is rather an informal word summary that hopefully touches upon the key aspects of the meaning and usage of blue balls that will help our users expand their word mastery.