What does Blue Waffle mean?

Blue Waffle is a fictional sexually transmitted infection (STI) that’s believed to both turn the vagina blue and disfigure it. It’s also said to originate from women who “get around” and/or their lack of hygiene. People say it only transmits from women to men. 😒

Where does Blue Waffle come from? 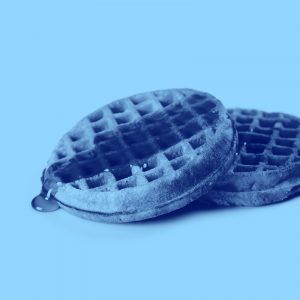 Blue Waffle was originally a bait-and-switch shock website that was first uploaded in 2008, according to Know Your Meme, “and consisted of just a close-up picture of what appears to be a diseased vagina, with a small description.” The bait part was a photo of an actual waffle that was blue with the caption “Bet you can’t find me on Google Image Search.” This led people to search for the image, which inevitably led them to the graphic and disturbing photo. 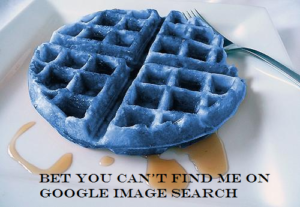 Google Trends shows initial searches in November, 2009, and the earliest Urban Dictionary entry is from June, 2009. The most upvoted entry reads: “Go to Google.com type in ‘”Blue waffle’ and then click the ‘I’m feeling lucky’ button. Then you’ll know what the fuck it means.” Other entries describe the fictional symptoms of the disease, primarily implying that women contract it and spread it. 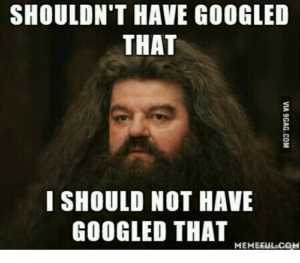 The myth of the disease was disproven in 2011 by the Women’s Health Foundation. They had Dr. Amy Whitaker, Assistant Professor of Obstetrics/Gynecology at the University of Chicago Hospital, examine the viral photo. She confirmed that the disease was fake, and that the image was photoshopped and/or the result of vaginal mutilation.

“Steve Bannon looks like the human version of blue waffle.”
Mr. Basura Head @devenxjames Twitter (Feb 8, 2017)
“*Girl in my aerobics class* ‘Do you know what's worse than gonorrhea.... blue waffle’ ”
Ky @kycenters Twitter (February 2, 2017)
“There is no disease known as ‘blue waffle disease,’ in the medical world. There is no disease that causes a blue appearance on the external genitalia. I had never heard of this until you wrote to our section…and asked about it. The common belief among medical professionals with whom I have spoken or e-mailed about this is that it is a hoax; the picture and ‘fake’ disease used to lure people into some web site.”
Dr Amy Whitaker, quoted by Vincent Vitale, Women’s Health Foundation Community Blog (August 8, 2011)
SEE MORE EXAMPLES

While long disproven, this hoax lives on. 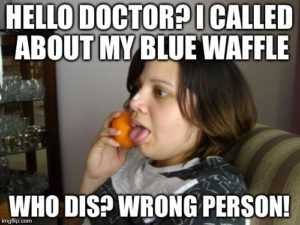 In 2013, a New Jersey City Councilperson was contacted by a constituent who asked what the city was doing about Blue Waffle disease as an April Fools’ prank. The Councilperson took the joke seriously, and was mocked for it, as you would be too.

This is not meant to be a formal definition of Blue Waffle like most terms we define on Dictionary.com, but is rather an informal word summary that hopefully touches upon the key aspects of the meaning and usage of Blue Waffle that will help our users expand their word mastery.