What does boing mean?

Boing is onomatopoeia for a springing, twanging sound or action, like a diving board or … an erection.

Where does boing come from?

The word boing imitates the sounds of things that have springs when they are released from compression, like when diving boards are jumped on.

Boing springs into the written record in the 1950s. Dr. Suess wrote an award-winning short animated film in 1950 called Gerald McBoing-Boing; Gerald could only speak through sound effects—prominently, boing.

In the 1980s, a boing-boing was a sometimes slang term for a “tourist” in the likes of New York City, whose neck snapped like a spring while they were gawking at the skyscrapers. Such persons are sometimes seen as boobs, so boing-boing also occasionally named a foolish or “embarrassing person,” according to Green’s Dictionary of Slang.

Speaking of boobs, sometimes bouncing breasts are said to boing. More commonly, penises are seen to “spring” into action, so boing was adopted in the 1990–2000s as a slang term for an erection and “sexual eagerness or arousal.” Beavis, from MTV’s Beavis and Butt-Head, notably used and acted out boing for erections when something turned him on.

UH OH! Timmy made a boner! BOING!
@seanparrott, October, 2017
Also I’m just going to say it b.c everyone thinks it.. the ringtone Boing on the iPhone sounds like a comical boner…
@pauloctavius, April, 2009 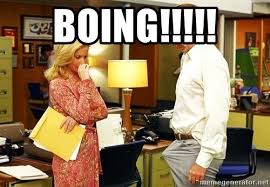 Boing is often used as a comic, cartoonish sound effect. Sometimes it’s innocent, as we see with Gerald McBoing-Boing…

… but very often, boing means an erection or arousal.

The worst thing is getting a random boner in class. Especially if you were presenting something then all the sudden BOING heeeelllooo

This is not meant to be a formal definition of boing like most terms we define on Dictionary.com, but is rather an informal word summary that hopefully touches upon the key aspects of the meaning and usage of boing that will help our users expand their word mastery.