What does boofing mean?

The term can also be used to the refer to the practice of putting alcohol or drugs up one’s butt to get intoxicated. Because that’s a thing.

Where does boofing come from? 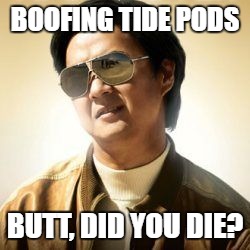 Boofing was popularized during the 1980s, a decade in which it made multiple pop culture appearances. It appears to come from butt-fuck, shortened to bu-fu and then boof.

Bu-fu appeared in rock legend Frank Zappa’s 1982 Valley Girl. At one point in the song, the stereotypical valley girl sings about her teacher, whom she calls Mr. Bu-Fu.

One of the love interests in the 1985 film Teen Wolf was named Lisa “Boof” Marconi. While the reasoning behind the name was never mentioned explicitly in the film, it was seen largely as a sort of inside joke that younger viewers would pick up on.

On a more local level, boof appeared in a May 1984 copy of Rice University’s student publication, The Rice Thresher. Written by a pair disputing the results of their championship intramural softball game, the article ended: “Someone call a proctologist, we’ve just been boofed,” as if they’d been screwed over in losing the match.

In the 2000s, boofing changed it up a little as people started placing drugs and alcohol up their butts, as it allows the substances to reach the bloodstream faster, apparently, than through the mouth. The practice, related to prisoners smuggling contraband in their anuses, got so big that in 2018 that The Daily Show with Trevor Noah did a segment on the phenomenon, also called butt chugging.

In fall 2018, boofing really hit the big time when it came up in a US Senate Judiciary Committee hearing to discuss a sexual assault allegation against Supreme Court nominee Brett Kavanaugh. Part of the purpose of the hearing was to assess his character during the time the allegation took place. Senators examined the content in Kavanaugh’s high school yearbook, in which “Have you boofed yet?” was written. Kavanaugh claimed that boofing referred to a different kind of butt stuff: flatulence.

Hope you took your sidebitch on a special date or confessed your love for boofing to your mums 2 day
@GaryPaintin, February, 2018
i just told my mom that i’m boofing molly on new year’s AS A JOKE and she goes “well honey as long as you do a quarter less than you usually would it hits you kinda hard” LMFAO
@badgal__tt, December, 2017

imgflip
Yes, it’s true that “boof” (and “bufu,” from which it was apparently derived) were sometimes used to refer to a sex act during the 1980s. Don’t click those links at work, as they trace the etymology back further than “bufu.”
Robert Verbruggen, The National Review, October 2018
SEE MORE EXAMPLES

It goes without saying that boofing, as well as its verb and noun forms boof, are not the most polite of terms. With the exception of its appearance at the Brett Kavanaugh hearings, it’s really a term that’s left on the streets.

In the 2000s, boofing frequently carries the meaning of consumption of substances via the anus. While some use the term seriously, more often than not it’s seen as a punchline.

For those looking for a more PG-rated definition of the term, boofing is also the name of a kayaking technique used to prevent the bow of the kayak from going underwater.

Among dog lovers, boofing can be a playful term for barking.

Maggie actually blew out some of her candles when she boofed 😂🤣 pic.twitter.com/4BGbw1Cnr2

This is not meant to be a formal definition of boofing like most terms we define on Dictionary.com, but is rather an informal word summary that hopefully touches upon the key aspects of the meaning and usage of boofing that will help our users expand their word mastery.