What does Chungus mean?

Chungus is a meme featuring a chunky version of the cartoon character Bugs Bunny, typically captioned Big Chungus. It began as gaming joke that spread online as a slang term for anything “(adorably) chunky,” similar to chonky.

Where does Chungus come from? 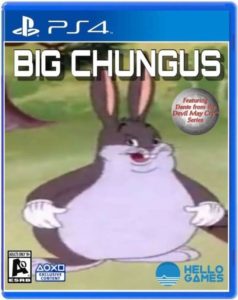 Chungus is credited gaming critic Jim Sterling. Sterling is said to have coined the word in 2012 as a blend of “chunky anus,” apparently used as an intentionally juvenile insult.

As the coiner of Chungus, it’s weird seeing it pop up independently. I feel like my small business has been squeezed out by Big Chungus.

The image of Bugs Bunny is from the Merrie Melodies 1941 cartoon “Wabbit Twouble,” featuring a noticeably heavier Bugs Bunny. 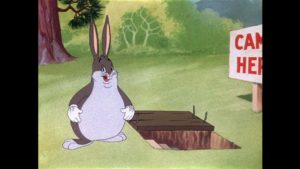 This image was posted on 4chan in 2017. It was joined with the word Chungus (which separately resurfaced on in Reddit 2016) when Redditor GaryTheTaco created a a mock Playstation 4 video game cover featuring the chunky Bugs Bunny, called Big Chungus.

Big Chungus spread beyond Reddit, going  viral on Twitter in December 2018 thanks a story spread about a mother attempting to buy the fake game for her son.

i love gamestop facebook groups for this reason pic.twitter.com/PeaiXVqqpU

Found a fat pigeon, he's my friend and his name is Big Chungus.
@TheDoctor837, April 2019
An absolute chungus was recently spotted in Lakeland, Florida. Video of the proud lad was uploaded to Facebook Dec, 29 by Suzy Griffin Paul, who wrote in the caption "Big Gator at Circle B Today!!!"
Colin Wolf, Orlando Weekly, January 2019 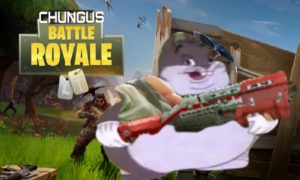 Like a lot of memes in internet forms and in the gaming community, Chungus is meant as often absurdist humor. Gamers and others online have made other fake video games about Big Chungus and adapted Chungus into other internet jokes, memes, and even songs.

In 2019, chungus (often lowercase) spread as a more general slang term for something considered adorably “chunky,” akin to the DoggoLingo chonky.

This is not meant to be a formal definition of Chungus like most terms we define on Dictionary.com, but is rather an informal word summary that hopefully touches upon the key aspects of the meaning and usage of Chungus that will help our users expand their word mastery.