What does cuff mean?

Cuff can refer to the ends of sleeves or rolled pants, handcuffs, or, in the world of modern love, the act of going steady with someone over the winter months.

venus is about to be in scorpio & i want to be in a relationship. *gasp* somebody hurry up & cuff before i change my mind.
@alpharoyce_, September, 2018
Spring is officially here, which means you can finally come out of hibernation and venture back out into the world. The question is, now that you can leave the house again, do you still need the person you cuffed up with during winter to ride (literally) out the spring with? After all, it's tradition to un-cuff as soon as the weather permits, so there's a good chance that when you first got together in chillier times, it was just a seasonal love affair.
Rachel Shatto, Elite Daily, March, 2018 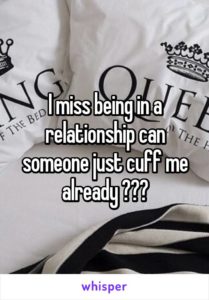 Where does cuff come from?

A cuff, which originally referred to a mitten or glove, is the end of your shirt sleeve. Garments that are rolled up on the ends are also said to be cuffed.

The expression off the cuff emerged in the 1930s for speaking without having anything prepared beforehand (i.e., notes written on the cuffs of one’s sleeve, which was apparently a thing).

Cuffs has also been short for handcuffs since the 19th century and later lent itself to slang. In the 2010s, dating culture began to refer to getting cuffed and cuffing season. This is when someone shacks up with someone during the fall and winter months—when no one wants to be alone over the holidays and wants to cuddle up with an S.O. in the cold. The metaphor is of handcuffing oneself to a partner (being exclusive) during these times as opposed to single in spring and summer. The term was popularized by rapper Fabolous’s 2013 song “Cuffin Season.” 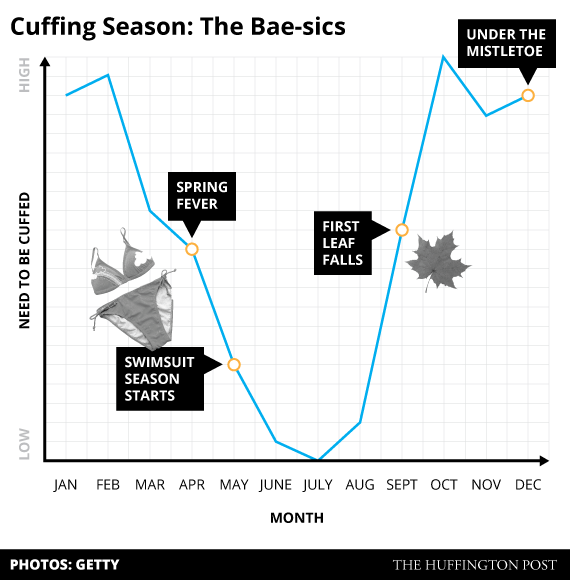 Cuff, of course, widely refers to the ends of sleeves or other parts of clothing (e.g., cuffed jeans). Off the cuff, for improvised or candid speaking, often appears in the expression off-the-cuff remarks or comments. Such words are often seen as trouble-making or hurtful due to their in-the-moment nature.

When talking about a relationship, you can use cuff in verb forms (to cuff someone or get cuffed) and in noun forms (cuffing season). Cuffing season is a popular topic on lifestyle publications each year when the leaves start changing color.

PSA: if anyone wants to fake date me during October, November, & December so we can go on dates like corn mazes, haunted houses, or crave pumpkins, see Christmas light shows & anything else in between hmu ! it’s cuffing season, ain’t nobody getting left behind 👀

This is not meant to be a formal definition of cuff like most terms we define on Dictionary.com, but is rather an informal word summary that hopefully touches upon the key aspects of the meaning and usage of cuff that will help our users expand their word mastery.