What does Damn, Gina mean?

Damn, Gina is a catchphrase from Martin Lawrence’s 1990s sitcom, Martin. Martin used it whenever his girlfriend Gina was being especially frustrating, or was looking particularly good. It’s been adopted into slang to convey awe, surprise, or appreciation.

Where does Damn, Gina come from?

Martin portrayed comedian Martin Lawrence’s life with his friends and his girlfriend, Gina (Tisha Campbell-Martin). Martin would issue a Daaaaamnnnnn, Gina! whenever he found her being difficult or looking fine.

Martin was popular during its original run, especially among black audiences, and has since become a classic black TV show alongside The Cosby Show, In Living Color, and The Fresh Prince of Bel-Air.

Fans of Martin quickly picked up Damn, Gina–an Urban Dictionary entry for it dates back to 2003. Khloe Kardashian helped popularize the term further after frequently using it on the reality TV show, Keeping Up with the Kardashians, and on her social media.

All summer I wore nothing but basket ball shorts. Today is the first day I decided to wear jeans cause it’s a bit chilly outside and it’s raining... bitch. None of my jeans fit me 😭 I wanted to get thick but damn Gina. Buying clothes is pricey.
@Benlvni, October 2018
Damn, Gina! This is the kind of Bill Gross hot-take we’d expect from anyone at PIMCO – or anyone who was married to Bill Gross – but to have his current boss do him like that in public? Even we are kind of shocked to see Bill shaded this hard.
Thornton McEnery, Dealbreaker, August 2018 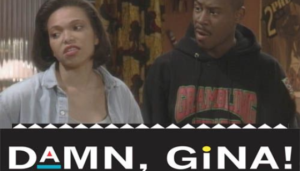 Black Americans (including those on Black Twitter) and fans of Martin may use Damn, Gina to communicate exasperation or delight, or as a playful allusion to the show–e.g., Damn, Gina, do you look fine tonight?! It’s the complete opposite of another slang phrase, Bye, Felicia!, from the black film Friday.

Oh I was like DAMN GINA WTF HAPPENED?! Lol like shit is REALLY bad when they shut you all the way down Lmao

lol Cisco says “damn Gina” and I’m howling..Martin will be a classic for all time #TheFlash #latewatch

There are numerous references to Damn, Gina in pop culture, a testament to Martin’s enduring appeal. It was used in an episode of American sitcom, Black-ish; it was the focus of a 2017 song by SZA, titled “Go Gina”; and, as mentioned, is a favorite of Khloe Kardashian on her reality show, Keeping Up With the Kardashians.

This is not meant to be a formal definition of Damn, Gina like most terms we define on Dictionary.com, but is rather an informal word summary that hopefully touches upon the key aspects of the meaning and usage of Damn, Gina that will help our users expand their word mastery.