What does deal with it mean?

Appearing in popular memes in the 2010s, the phrase deal with it is a bold, self-assured declaration ordering someone to put up with something they may object to or to make do with a challenging but ultimately manageable situation.

Where does deal with it come from? 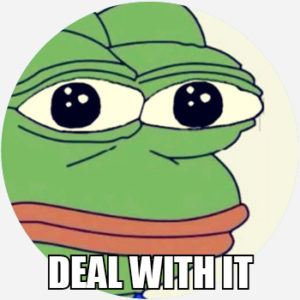 While the verb phrase deal with, meaning “handle or cope with” something, has been in use since the 15th century, the modern catchphrase deal with it was popularized in the early 2000s. Internet cartoonist Matt Furie, who created Pepe the Frog, included deal with it as the punch line of a webcomic posted in 2005, one of the earliest introductions of the phrase into meme culture.

The phrase then spread as a popular GIF posted in online forums and discussions. The first GIF featured the “smugdog” smiley from the website Something Awful. It depicted a smirking dog with pixelated sunglasses descending down onto its head along with the caption deal with it. The sunglasses are meant to suggest the quality of being cool, that is, dealing with it. By 2010, internet-culture website Urlesque published a list of 9 deal with it GIFS in its “New Trend” category, crediting meme-sharing site Dump.fm. Many GIFS punned on deal (“Dill with it,” with the original animated sunglass dropping onto an image of dill plant), referenced popular culture (“What the deal with it,” including a picture of comedian Jerry Seinfeld), or played on “cool” (with “deal with it” and the sunglasses appearing on top a bag of Cool Ranch Doritos). Many other variations have since spread online, though they tend to feature some form of sunglasses and the text deal with it. A special website was even created to allow users to easily make their own deal with it memes with sunglasses.

Google searches for deal with it spiked in February 2015 when Senate Minority Leader Harry M. Reid spoke at an indoor news conference wearing dark sunglasses indoors due to an eye injury. Social media users quickly incorporated him into the deal with it meme.

Examples of deal with it

“Nobody LIKES abortion. We all wish it wasn't necessary. But it is. Accept it. Deal with it. Get politicians out of women's wombs. #auspol”
@LittleBertie01 Twitter (May 11, 2017)
“I am who I am. I like what I like. I love who I love. I do what I want. Get off my back and deal with it. It's my life, not yours.”
@nramrasyhraa Twitter (May 22, 2017)
“If women were feeling overwhelmed, I had the feeling that the culture just thought, 'Tough. You made this choice to work, now deal with it.'”
Rebecca J. Rosen, “America's Workers: Stressed Out, Overwhelmed, Totally Exhausted,” The Atlantic (March 25, 2014)
SEE MORE EXAMPLES

Who uses deal with it?

Deal with it is often said or written in a smug, provocative, or self-confident way by someone who knows their actions may be controversial but doesn’t care. Here, the phrase often punctuates the end of a comment, acting like a sassy challenge. e.g., “You don’t like what I do or think? Deal with it.”

Deal with it can also express playful affection for or strong support of something in the face of critics. An Atlantic headline in 2013 fawned over a new portrait of then-Vice President Joe Biden with “deal with it,” for instance, while a 2016 review of Beyoncé’s “Formation” video told readers to “deal with it” as protest art.

The phrase deal with it has also been used in the titles of books, songs, and an American game show about public pranks.

This is not meant to be a formal definition of deal with it like most terms we define on Dictionary.com, but is rather an informal word summary that hopefully touches upon the key aspects of the meaning and usage of deal with it that will help our users expand their word mastery.