What does dickweed mean?

Don’t be a dickweed. Dickweed is an insult for people who are rude, selfish, stupid, inconsiderate jerks no one wants to spend time with—just under an asshole in the sweary pecking order.

Where does dickweed come from? 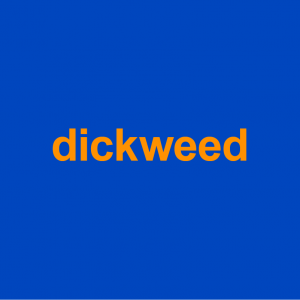 Dickweed, like a lot of truly “rad” slang, is a product of the 1980s. While calling someone a dick (“penis”) is an old insult, the addition of weed is newer. It may allude to pubic hair. It may just liken the person to useless, unwanted plants. It may just also be fun to say.

Evidence for dickweed in print comes in 1984, but it didn’t take long for dickweed to reach the mainstream. In the 1985 teen movie Weird Science, a young Bill Paxton drops a legendary dickweed. In the 1989 Bill and Ted’s Excellent Adventure, the titular Bill (Alex Winter) issues the classic line: “You killed Ted, you medieval dickweed!”

By the 1990s, chat rooms and forums became popular. Dickweed, a humorous term that’s less offensive than asshole, was ready for them, and early 1990s Usenet forums were deep in the dickweeds.

TV in the 1990s had no shortage of dickweeds. The word is closely associated with Mystery Science Theater 3000, where it was a favorite insult among the characters and the topic of a 1992 episode where they debate whether or not it’s a swear word. MTV apparently decided that it was, as Mike Judge mutated dickweed to dillweed for Beavis and Butthead for the channel.

That guy who's been telling my parents I "draw porn online" is gonna have a FIELD DAY with my new book cover! Haw haw. Eat it up, dickweed!
@Iron_Spike, March 28, 2008
And of course "dillweed" is to dickweed as "fudge" is to fuck—the socially acceptable variant. Which is almost certainly why Beavis & Butthead used it so frequently on the somewhat more conservative MTV of the '90s.
Rob Bricken, Gizmodo, December 12, 2013
There is no way we can hate UT as much as you, mainly because they are uf’s rival, but when the occasional dickweed enters the chat, a group effort is reasonable.
@TheRealTCG3, August 9, 2020
SEE MORE EXAMPLES

Much of 1980–90s culture has died out, but dickweed remains a popular insult for a contemptible person. The juvenile tone and mild swearing make dickweed well-suited for expressing maximum disdain with minimal blowback, all with a dash of comic effect. Don’t call your boss or teacher a dickweed, but you might get away with it if you write for Family Guy.

Some unfortunate people use Dick Weed … because that’s their name. Notable dickweeds include a Hollywood special effects artist, who, wisely, goes by Rick. Then there’s Richard Weed of Newport Beach, CA, convicted of corruption and securities fraud in 2016.

This is not meant to be a formal definition of dickweed like most terms we define on Dictionary.com, but is rather an informal word summary that hopefully touches upon the key aspects of the meaning and usage of dickweed that will help our users expand their word mastery.