What does doggy style mean?

Where does doggy style come from? 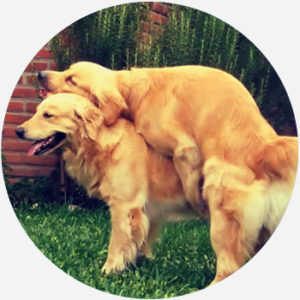 Male dogs, as well as many other animals, copulate with females from behind, which likely inspired the name doggy style for an analogous manner of intercourse between humans. Biologists refer to this form of copulation in mammals as lordosis behavior.

Predating doggy style is dog style, which emerged in the 1940s and notably appears in an early 1957 manuscript of William Burroughs’ controversial novel Naked Lunch: “Greek lads white as marble fuck dog style on the portico of a great golden temple.” In his 1971 book Sexuality and Homsexuality, poet and psychoanalyst Arno Karlen glosses: “Coitus a tergo—from behind, ‘doggy style.’” And in his 1977 The Film Maker’s Guide to Pornography, Steven Ziplow references doing it, simply, “doggie.”

“You say, 'Child bearing hips.' I say, 'Doggy style hand grips.'”
Tica Patty @plockwood65 Twitter (April 30, 2017)
“Having sex doggy style is a naturally sexy position and it's one of my favorites.”
Lea Rose Emery, “7 Ways To Make Doggy Style Even Hotter,” Bustle (September 29, 2016)
“We like to think of doggy style as the original bad girl sex position. There's something a little wild, naughty, and titillating about it that just amps up the passion and makes you lust for more.”
Arielle Pardes, “11 Ways to Make Doggy Style Even SEXIER,” Women’s Health (July 4, 2014)
SEE MORE EXAMPLES

While the term is widely often used as an adverb (doing it doggy style), it can also be used as a noun (they prefer doggy style), modifier (the doggy-style position), and more pornographically, as a verb (to get doggy-styled).

Given the term’s sexual context, some may find doggy style offensive or obscene. The term is also not to be confused with downward dog, a yoga and sex position.

This is not meant to be a formal definition of doggy style like most terms we define on Dictionary.com, but is rather an informal word summary that hopefully touches upon the key aspects of the meaning and usage of doggy style that will help our users expand their word mastery.