What does duck butter mean?

Duck butter is a slang term that refers to sweat, semen, smegma, or other fluids around the genitals. While vulgar, the term is often used for humorous effect.

Where does duck butter come from? 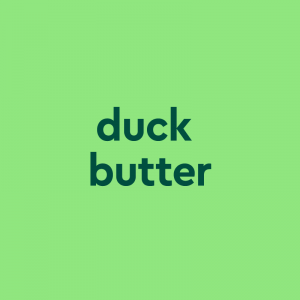 The term duck butter is older than you may want to believe. In the 1930s, it was slang for semen, and in the 1950s, smegma. The duck may refer to the smell of duck droppings, according to Green’s Dictionary of Slang, and the butter, its liquidness and light color.

The 2018 romantic comedy Duck Butter took advantage of the slang. It follows two women (Laia Costa and Alia Shawkat) who are determined to have sex every hour, on the hour—the prolonged sexual activity apparently churning up some serious duck butter, among things (like emotions).

How much duck butter y’all got rn.
@Foxy_grandpa777,  September 6, 2020
If guys get duckbutter during hot days. Does that mean girls get goose butter.
@nammypanda, September 7, 2020
The categorically good things about Duck Butter are: 1) The sex scenes, which feel real and are not male gaze-y in any way; 2) the fact that the screenplay was co-written and the film was executive produced by Shawkat, an actual queer woman; 3) Shawkat’s performance. She’s a star; and 4) There are moments of real intimacy; most importantly, Naima’s recounting of a sexual experience that leads to Sergio explaining the concept of “duck butter” to her.
Heather Hogan, Autostraddle, August 2, 2018
SEE MORE EXAMPLES

While both men and women are said to get duck butter, the term is more closely associated with—how do we put it?—ball sweat.

Half of you nasty fucks out here smelling like duck butter

That association bewildered some over the choice of the term as the title for the 2018 film.

All of the definitions of duck butter are horrible. Why is this the name of a lesbian rom drama?

But as with many sexual slang terms, duck butter sounds innocent enough, which means class clowns seize on it for some jokes.

Told everyone in the car I hope you brought your duck butter today it’s going to be a hot one. My grandma “well I don’t have any duck butter” 😂😂😂😂😑😂

This is not meant to be a formal definition of duck butter like most terms we define on Dictionary.com, but is rather an informal word summary that hopefully touches upon the key aspects of the meaning and usage of duck butter that will help our users expand their word mastery.