What does ermahgerd mean?

Ermahgerd is a humorous version of the phrase oh my god, written as though pronounced with a heavy influence of extra Rs. It’s meant to imitate the sound of someone speaking through a retainer.

Where does ermahgerd come from? 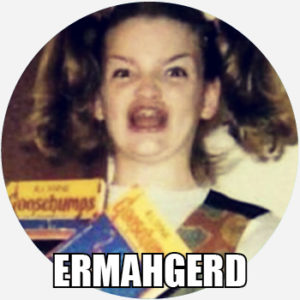 Ermahgerd originated as an internet meme. On March 14, 2012, a photo of a young woman, Maggie Goldenberger, was posted on reddit. She was holding Goosebumps books and wearing pigtails, a retainer, and an expression of great excitement. One user known as “plantlife” captioned this “Gersberms / Mah fravrit berks.” Another appended “Ermahgerd / Gersberms.” The captioned photographs went viral, and inspired people to make their own versions of the image.

Initially this involved other captions on the same photo (“Dis wers mah face / wen ah read da scurreh pert”) or photoshopping new items into the young woman’s hands (“Ermahgerd/Mershed perderder”). As the meme gained popularity, the extensions of it expanded, and the original photo no longer needed to be used to evoke the meme. Examples of this include a photo of Game of Thrones character Daenerys Targaryen’s face with the caption “Ermahgerd / Derghuns,” or a photo of a surprised-looking puppy “Ermahgerd / Dergy toyz.”

Soon no photo was required to reference the meme, and ermahgerd began to be used in text for humorous effect, with or without the accompanying speech style. It’s now used to convey excitement or surprise, much like oh my god is, but with a joking overtone alluding to the type of extreme excitement experienced by a dorky teenager over her favorite books.

Ermahgerd is used mostly in humorous contexts, rather than formal ones. It’s more likely to be seen online, particularly on social media, or in casual texting. It can be used in isolation to lend a lighthearted element to a text or post. However, it’s frequently used with other words written in the same tone.

This is not meant to be a formal definition of ermahgerd like most terms we define on Dictionary.com, but is rather an informal word summary that hopefully touches upon the key aspects of the meaning and usage of ermahgerd that will help our users expand their word mastery.