What does feminazi mean?

Feminazi is an offensive slur for a feminist whose views are considered radical or extreme.

Where does feminazi come from? 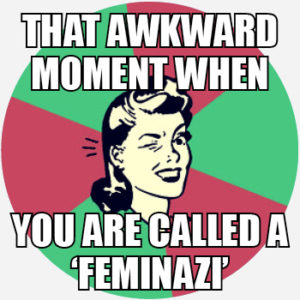 The term feminazi emerges as a blend of feminist and Nazi in far-right circles in the late 1980s. While the coinage is credited to professor Tom Hazlett, conservative talk-show host Rush Limbaugh popularized the term in the 1990s. In his 1992 book, The Way Things Ought to Be, Limbaugh notably defines a feminazi as an “obnoxious” and “militant” feminist “to whom the most important thing in life is seeing to it that as many abortions as possible are performed.” The use of Nazi is inspired by an extreme belief that such women wants a “modern-day holocaust” of men via mass abortion of them.

Initially, Limbaugh said that there are probably no more than 25 of these women in the entire world he’d classify as feminazis. But by 1995, he was using feminazi to slur all of feminism as a radical movement. As Rush’s radio program continues to reach a massive audience, his many listeners began to pick up the word. As a result, by the 2000s feminazi had become a way for far-right ideologues to refer to any outspoken woman concerned with gender equality or women’s issues.

The feminazis just didn’t like human nature. They thought it was unkind to them, for one thing, and they just didn’t like it.
Rush Limbaugh, The Rush Limbaugh Show, July, 2017
A feminazi no doubt who thinks women are better than men. If she wants to play lumberjack, she needs to learn to hold her end of the log.
@TheSaneRight, February, 2018
‘Sometimes the world can be a bit of an unfriendly place for women’ Internet: WHAT IS THIS FEMINAZI PROPAGANDA GARBAGE STOP MAKING MEN UNCOMFORTABLE YOU LYING SHREW
@Larawithabird, February, 2018
SEE MORE EXAMPLES

Feminazi is a sexist slur used in speech and digital communication. It seeks to discredit feminists by portraying them as extreme.

As noted, the coarse insult of feminazi is especially issued by men on the political far-right to any person advocating for women and other marginalized identities. However, it particularly targets vocal activists stereotyped as “butch,” man-hating, ball-busting, politically-correct lesibans. In this way, feminazi is used as a rhetorical “straw feminist,” an ad hominem caricature of a feminist that attempts to paint all feminists as radical.

Feminists themselves have attempted to reclaim the label, sometimes ironically self-identifying as a feminazi to diffuse its stigma. Many other feminists, however, strongly object to the sexist and extremist attack implied by feminazi.

This is not meant to be a formal definition of feminazi like most terms we define on Dictionary.com, but is rather an informal word summary that hopefully touches upon the key aspects of the meaning and usage of feminazi that will help our users expand their word mastery.