What does Gangnam Style mean?

Oppa most views ever style. Gangnam Style is the name of pop song by South Korean musical artist, Psy. The phrase can also refer to his massively viral music video and the famous, much-imitated dance performed in it.

Where does Gangnam Style come from? 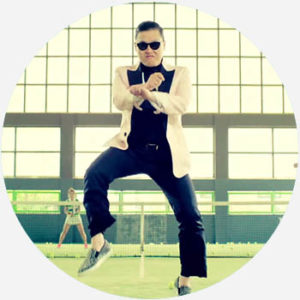 Released in July 15, 2012, Gangnam Style is named after Gangnam, a district of Seoul, South Korea. Gangnam means “south of the river”–in this case, south of the Han river. Gangnam is also one of the richest and most glamorous places in Seoul. According to the Guardian in 2012, it accounts for almost 10% of the country’s land value, and is full of upmarket shops. The area’s flashy wealth makes it a symbol of materialism for many South Koreans, and the topic of Psy’s hit song.

The song details the singer’s search for a woman who’s his type, (and why he himself is a good catch) and the chorus boasts of his association with a luxurious, fashionable Gangnam lifestyle. The song’s music video featured a distinctive dance which the artist has called the “horse dance,” which is done by shuffling the feet with knees slightly bent and the hands crossed at the wrist. (As if holding horse reins)

the nut job's credits feature the gangam style song and a cg psy dancing to it pic.twitter.com/exzI5ZvUnx

While only Korean music news sources covered the song just after its release, Gangnam Style and its video had skyrocketed to worldwide popularity by the end of summer 2012. The song went on to become one of the most viral videos in internet history–so popular that YouTube had to upgrade its hit counter to accommodate it in 2014. At the time of the upgrade, it had been viewed over 2,147,483,647 times—the maximum number possible for YouTube to register.

if you're wondering , Gangam style now has 1 Billion views. it is now the most viewed piece of media on record

As of 2018, the video was the most watched video on YouTube of all time, with well over three billion views. 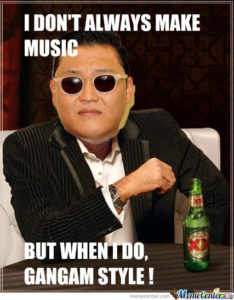 Meme Center
Add nonsensical lyrics and a dance routine to a catchy beat, have it delivered by a middle-aged man in a zany outfit, and you have your next 'Gangnam Style'.
Yusuf Huysal, “Pen-Pineapple-Apple-Pen is the new Gangnam Style,” Time Out, September 28, 2016
Thursday after the footy, we're Gangnam Styling it up! #9NRLFootyShow
NRL Footy Show Facebook (March 28, 2017)
SEE MORE EXAMPLES

Gangnam Style’s popularity inspired countless parodies and imitations performed by everyone from athletes to astronauts—many of these becoming viral or spawning new memes in their own right.

bowser does the gangam style pic.twitter.com/cMiI43NIYA

The song’s lyrics have generated controversy, with some holding that they’re a criticism of Korean consumerism. However the artist Psy has said the song was just for fun. In part, due to confusion over the song’s lyric “oppan Gangnam style” (with oppan meaning “big brother” in Korean), its lyrics also generated a snowclone (a sort of phrasal template), oppan x style, where the user can insert any word they choose to create a new meaning.

This is not meant to be a formal definition of Gangnam Style like most terms we define on Dictionary.com, but is rather an informal word summary that hopefully touches upon the key aspects of the meaning and usage of Gangnam Style that will help our users expand their word mastery.