What does git gud mean?

Git gud, a slang rendering of get good, refers to getting better at a task or skill, used especially among video gamers online.

Where does git gud come from? 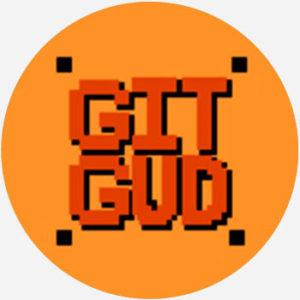 Git gud is a deliberate misspelling of the phrase (to) get good (at something), based on an apparent “folksier” pronunciation of the phrase.

While we can find earlier, one-off instances of git gud, the phrase notably appeared in 2009 in online video-game forums and had spread by 2013. Google searches spiked in April, 2016, when online cartoonists latched onto the phrase’s popularity in the gaming community in their comic observations about video-game culture.

Since then, git gud has become a common, humorous expression in gamer slang, which often features intentional misspellings for economy or rhetorical effect.

after playing music for 8 hours a day for a week non stop... im gonna go home and practice sight reading...gotta git gud
@TheJasonGuzman, June, 2017
This has been a long time coming, but I'm gonna be spending this week focusing on @KillerInstinct! Lets #playki on #XboxOne and #Steam this week and git gud!
@K0LDX, April, 2018
[W]hy should gamers who have clearly worked hard and passionately to “git gud” have to endure gamers who have managed to cheat their way to the top?
Nick Meekham, Cultured Vultures, April, 2018
SEE MORE EXAMPLES

As noted, git gud is especially used by the online video-game community. In this space, the phrase often insults a new player to varying degrees of offense.

At one end of the spectrum, git gud can be playfully used by an experienced gamer after they beat a new player. This use is a form of “smack talk,” à la eat my dust, and implies the novice needs to take the time to get good at the game. This more good-natured git gud may also be used in video-game journalism and forum commentary about some aspect of a game or gaming culture.

On the other end of the spectrum, the git gud mentality has been criticized as ableist. As professional video-game reviewer Holly Green wrote in Paste in 2017, for instance, that gamers with disabilities cannot always achieve the same level of play as abled gamers.

Git gud is also more generally used as a shorthand for “investing the time and energy to develop mastery of a game.” Gamers may jokingly use the phrase to indicate they are spending time gaming instead of attending to more pressing obligations.

Users familiar with the gaming expression may apply git gud to developing mastery in other, non-gaming contexts (e.g., learning a new language or how to read music).

This is not meant to be a formal definition of git gud like most terms we define on Dictionary.com, but is rather an informal word summary that hopefully touches upon the key aspects of the meaning and usage of git gud that will help our users expand their word mastery.