What does going Dutch mean?

Do you want me to pick up the bill or do you want to go Dutch?

When dining, going Dutch means each person pays for their own food or drinks.

Where does going Dutch come from? 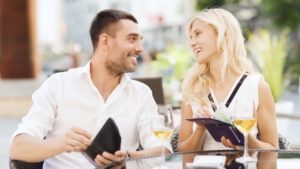 Going Dutch means that every person in a group of diners or imbibers pays for their themselves. It’s popularly thought the expression originated as a British slur towards the perceived stinginess of Dutch people. While the British certainly did have many colorful phrases against the Dutch—and French, and Spanish, and any of their other maritime rivals— going Dutch doesn’t appear to be one of them. 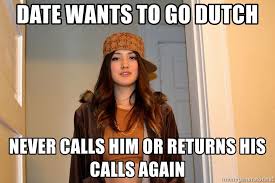 Going Dutch appears to come from a 19th century Americanism, a Dutch treat (or Dutch lunch/supper), which also refers to each person paying their own way in a meal. The Dutch, here, apparently refers not to people from the Netherlands, but from Germany and Switzerland: the Pennsylvania Dutch, who supposedly had a custom of bringing their own food to gatherings, like a potluck. 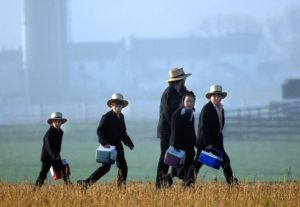 Dutch treat is attested as early as 1873 in a Missouri newspaper referring to drinkers pay their own bar tabs. The idiom going Dutch is recorded as early as 1914 and spread throughout the English-speaking world.

Dating apps are helping to eradicate old rules and it is now far easier for women to orchestrate our own sexual destiny. We can avoid unwanted attention all with the flick of a finger or a painful “slow fade”. We initiate the contact and we are in control. So why did I still find myself seriously irked after going Dutch on a recent Tinder date?

Georgina Lawton, The Guardian, September 2017
So im getting my Mom a watch and my Dad and bro are going dutch on a new dryer. Mother's day shopping done.
@wishful_thinkr, May 2014 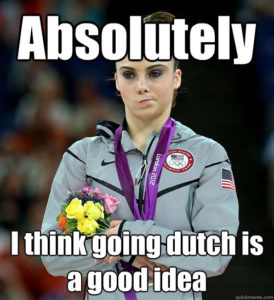 Going Dutch is generally used of purchasing food and drinks, but it can also be used of other purchases, such people splitting the costs of gifts, or sharing responsibility in a group effort.

I’m closing on a house in two weeks, so… you could all go Dutch on a housewarming gift. https://t.co/h70GfNwig6

When you go Dutch on your first deployment.
A European Army? The Germans and Dutch Take a Small Step – The New York Times https://t.co/6xWsKV0M6y

Among friends, going Dutch is a casual and common practice. Among romantic partners, however, going Dutch can seem cheap and rude, especially if a man doesn’t pay for a female date’s dinner. That said, some may find this custom old-fashioned and patriarchal.

Ladies word of advice..if he asks u to go dutch on the first date he's either cheap as hell or dosent find u interesting anymore

When a man asks you to go Dutch just say No! Make sure you have fast cash to call a taxi or use @Uber. Cheap men are not worthy
Of you!

I don’t mind going Dutch on dates or whatever but don’t everrrrr make it seem like you’re about to pay for the whole date when you know you don’t have money. It makes you look bad

This is not meant to be a formal definition of going Dutch like most terms we define on Dictionary.com, but is rather an informal word summary that hopefully touches upon the key aspects of the meaning and usage of going Dutch that will help our users expand their word mastery.