What does grom mean?

Grom, shortened from grommet, is Australian and Californian slang for a young, often precocious surfer. Gremmie is a common synonym.

Where does grom come from? 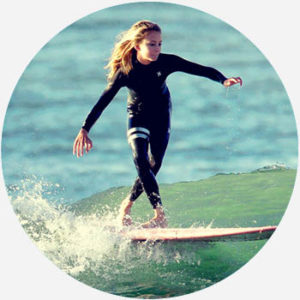 There are many theories as to the origin of grommet as slang for a young surfer, including gremlin and grumete, Portuguese for a “deckhand.” A likelier etymology is the Middle English gromet, meaning “ship’s boy” and related to the word groomi.

Grommet or grom was popularized in Australia in the 1950s and made its way to the US West Coast in the 1970s. It became associated with surfer culture, which evoked the surfer aesthetic: long hair, bedrooms lined with posters ripped from magazines, and distressed denim. Groms were often viewed like little punks or hangers-on.

Australia’s best grom's were shredding today for the National Final of the Rip Curl #GromSearch Series presented by Flight Centre Aus!
@ripcurl, January, 2017
He and I were probably at a lot of the same punk shows back in the day. I probably tried to get him to buy me cigarettes when I was just a wee grom
@duvalbill904, January, 2018
DeeDee Almida describes her son London as one of the nicest kids you could meet. At 14, he’s an up-and-coming surfer who loves to compete and isn’t more aggressive in the water than any other surf grom.
Laylan Connelly, The Orange County Register, May, 2017
SEE MORE EXAMPLES

Surfers in Australia and the West Coast of the United States are most likely to use the term grom. Though it is a specialized term, it has been popularized to the extent to which it is now used in official names of youth surfing clubs and competitions.

In the United States, grom no longer just refers to young surfers. The term can also be used to refer to skateboarders and snowboarders. Grom has also expanded in usage in Australia, often referring to a young or inexperienced person in any area, not just surfing.

Note that grommet may be considered vulgar to some New Zealand speakers.

This is not meant to be a formal definition of grom like most terms we define on Dictionary.com, but is rather an informal word summary that hopefully touches upon the key aspects of the meaning and usage of grom that will help our users expand their word mastery.