What does guala mean?

Guala is Latin-American Spanish slang used for someone who shows their Latin heritage through clothes, mannerisms, and language.

Where does guala come from? 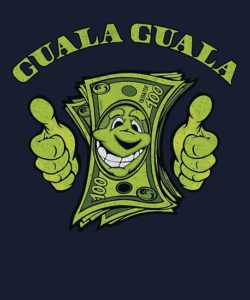 Among Latin Americans, guala refers to someone who shows their Latin heritage proudly. Its origin is obscure, though connections have been made to the Guatemalan town, Guala.

Guala is closely associated to Puerto Ricans and Dominicans, but its not exclusive to the Caribbean. Urban Dictionary has entries dating back to 2008 and 2009 for guala, including one as slang for “cash.”

In March 2017, hip-hop artists G-Eazy and Carnage released a track called Guala. In it, they rap about making money and getting girls. The chorus riffs on multiple suggestions of guala: “And she want the guala guala / And she like the guala guala.”

Following the release of the song, guala spiked in search interest and on social media. Instagrammers and Tweeters adopted the word guala or hashtag “#guala” to talk about the song and money.

Guala is used to refer to someone who is proud and forward with their Latin culture, from listening to Latin music loudly to wearing styles or colors associated with their culture to speaking a lot of Spanish.

As noted, guala is closely associated with Puerto Ricans but is found among speakers from other Latin American cultures. It’s used as both a noun and an adjective, so you can call someone a guala while also saying their outfit is really guala.

Guala can be used as an insult for someone seen as too showilyy or unattractively Latin (e.g., You’re acting too much like a guala today).

My sister going to that parade shit in a guala ass lil outfit saying "i gotta represent" lmao shes wild. Looking like the pr flag and shit.

Guala, as in “money,” can be used on its own, guala, or doubled up as guala guala, because why not say it twice. This guala is more widely used by non-Latin Americans thanks to G-Eazy and Carnage’s song.

Been about the guala guala 💰

This is not meant to be a formal definition of guala like most terms we define on Dictionary.com, but is rather an informal word summary that hopefully touches upon the key aspects of the meaning and usage of guala that will help our users expand their word mastery.