What does Gummy Bear Song mean?

The Gummy Bear Song is a viral novelty song and video featuring a sentient gummy bear.

Where does Gummy Bear Song come from? 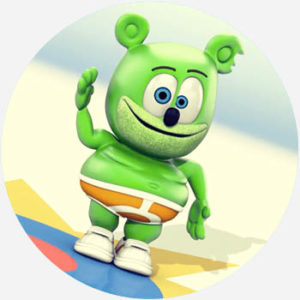 The official title of the song is “I’m a Gummy Bear (Gummy Bear Song).” First released in 2007 in Hungary, the song quickly rose to become an international sensation. The song was at the top of the ringtone charts for eight months in Hungary, and the album ranked in the top 20 in international music charts after its debut. The “artist” is a virtual cartoon character known as Gummibär after the German candy. The song was composed by a German artist named Christian Schneider.

The song’s popularity was boosted by its music video. It starred Gummibär, a large green gummy bear with a bite out of one ear wearing orange underwear and a pair of sneakers. It was translated from its original Hungarian and English version into a large number of other languages, from Czech to Yiddish, which further launched the Gummy Bear Song into a truly a global phenomenon.

The “artist” Gummibär released an album featuring the original Gummy Bear Song and some covers of other songs. The popularity of the character led to a feature-length film called The Yummy Gummy Search For Santa in 2012. In 2016, the character starred in the television show called Gummibär and Friends: The Gummy Bear Show.

“this is in the same genre of shitty videos as the gummy bear song, and the hippo singing 'lion sleeps tonight'”
funy @funysoft Twitter (April 8, 2017)
“She actually was trying to grab my phone because it had The Gummy Bear song playing while we were cleaning and I was in a sports bra because while we were cleaning baby girl spilled a smoothie all over me and the carpet.”
Natalie Hodson Facebook (September 3, 2014)
“Sidenote to that: did you know that if you look up The Hamster Dance on YouTube, you'll want to watch related videos like Crazy Frog and The Gummy Bear Song and you'll just keep tumbling down this auto-tuned hole forever and ever?”
Sam Prell, “Watch No Man's Sky's weird creatures get a classic Disney introduction,” GamesRadar+ (August 11, 2016)
SEE MORE EXAMPLES

The Gummy Bear Song has drawn frequent comparisons to other viral song-and-video combos, such as Crazy Frog and the Hamster Dance. Often deemed lovably if obnoxiously catchy, all of these are characterized by simple, easy-to-remember lyrics and high-pitched vocals on top of a jaunty dance beat tune paired with a video starring a dancing computer-animated anthropomorphic animal (or, in this case, gummy).

This is not meant to be a formal definition of Gummy Bear Song like most terms we define on Dictionary.com, but is rather an informal word summary that hopefully touches upon the key aspects of the meaning and usage of Gummy Bear Song that will help our users expand their word mastery.