What does gunt mean?

Gunt is slang for a fatty area below the belly button and above the pubic area of a woman, often as a result of childbirth, weight gain, or just having a totally normal body.

Where does gunt come from? 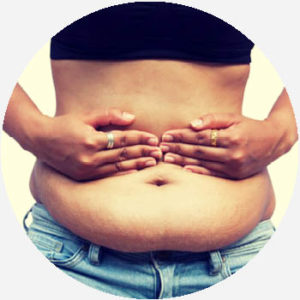 Gunt is a combination of the words gut and the vulgar slang cunt—and has nothing to do with the Gunt river in Tajikistan … we know you were wondering.

It’s unclear who first used the word, but it appeared online in a health forum (by a woman who notes it as slang terminology …) as early as 2001 and was in use on internet forums like Something Awful as early as 2003  By 2007, gunt had made its way onto Twitter and into mainstream use.

While early uses of gunt only refer to a woman’s squishy area between the belly and genitals, it later expanded to include describing a panniculus, the medical term for a large belly that hangs down in front of the genitals. The male version of this kind of gunt is a gock, a combination of gut and cock.

A group of gunts, at least as some funny guy cooked up, is known as a girdle.

Well shunt me in the gunt and call me a munt funter. As soon as Bob Woolmer died I suspected he was poisoned. Death now seen as suspicious

...I 1st heard GUNT on the @HowardStern show. Who else could think of something that great!!!

@LisaLampanelli, April, 2011
Make sure you address stomach fat before it becomes excessive and you develop a gock or gunt depending on your gender.
@mikemahler, December, 2016
SEE MORE EXAMPLES

While gunt isn’t nearly as coarse as one of its parents, cunt, it’s not quite polite.

That didn’t stop New Zealand metalcore band, Gunt, who’ve been thrashing away under their slang-y moniker since 2005. Nor does it stop radio shock jock Howard Stern, a known user of gunt, which has since become popular among his listeners.

Mostly, though, gunt is used humorously, self-deprecatingly, and body-positively by women (and occasionally men) to describe that weird, flabby, and super common bit that can only be tamed with a good pair of Spanx.

TFW you need a shortbread the diameter of your gunt pic.twitter.com/YDZYDcQaZP

This is not meant to be a formal definition of gunt like most terms we define on Dictionary.com, but is rather an informal word summary that hopefully touches upon the key aspects of the meaning and usage of gunt that will help our users expand their word mastery.