Feedback
half your age plus s...
ham

What does hall pass mean?

A hall pass is a note or other object that gives a student permission to walk through the halls of a school unsupervised, usually for a specific purpose, like going to the bathroom or the nurse’s office.

A hall pass is also an agreement between people in a romantic relationship that one or both of them may have sex with other people.

Where does hall pass come from? 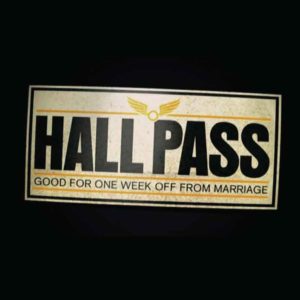 In the context of school, from elementary school to high school, a hall pass is a written note or a physical object that gives a student permission to be outside the classroom. This sense of hall pass is recorded as early as the 1930s.

As a metaphorical extension, a hall pass can be used beyond the context of school to describe a situation where something that would not normally be permitted is allowed. For example, an actor might get a hall pass for a terrible performance in a movie because they are so charming in real life. The expression free pass is used in a similar way.

My kids have one “hall pass” to get in trouble, and that is for the two of them to get caught pretending to be one adult in a trench coat. I promise to never be mad about that.

As a slang term, a hall pass is used to refer an agreement between a couple that they can have sex outside of their relationship, generally on a temporary or one-off basis. Hall pass is specifically used to refer to permission for one partner to sleep with a celebrity without consequences. The term is recorded at least by the 2010s. Hall passes may be a regular thing for a couple or a new development in their relationship.

In addition to the above meanings, Hall Pass is the name of a 2011 American rom-com produced and directed by the Farrelly brothers, starring Owen Wilson and Jason Sudeikis.

Reality TV star Toya Wright appeared on Bravo's Untying the Knot and admitted she gave her husband, Mickey "Memphitz" Wright, an "eight-day hall pass" from their marriage to have outside sexual encounters.
Britni Danielle, Essence, March 2016
I'm a bit older and what we meant by "hall pass" was, that the girl gave you the OK to go out with the guys. It really didn't mean she was giving me an OK to go out and pick up chicks … That being said, I can't think of how many times I've been out without my gf and said to a guy or girl, yeah she gave me a hall pass tonight.
ayb (user), Reddit, 2013

Outside school, hall pass may be used in the sense of a freebie or getting to break the rules just once.

Do you get a hall pass on working out if your yoga mat is occupied? pic.twitter.com/5XYmioMO31

As sexual slang, a partner in a relationship may be said to get a hall pass. Hall pass is often used, though, to refer to the person outside the relationship the partner is permitted to have sex with. For instance, in Season 4, Episode 10 of the show This is Us, the character Kevin Pearson (an attractive, successful actor on the show) was a married woman’s hall pass.

This is not meant to be a formal definition of hall pass like most terms we define on Dictionary.com, but is rather an informal word summary that hopefully touches upon the key aspects of the meaning and usage of hall pass that will help our users expand their word mastery.