What does Hit the Quan mean?

Hit the Quan is a hip-hop dance and song by rapper iHeartMemphis. Key movements include stepping, squatting, and swinging of the arms, mimicking the lyrics “I said get down low and swing your arm.”

Where does Hit the Quan come from? 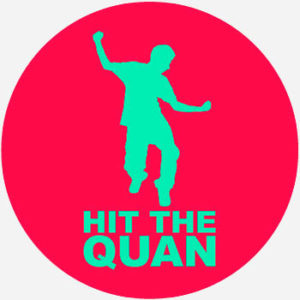 The Memphis rapper iHeartMemphis (or iLoveMemphis), also known as Richard Colbert, released his debut hit single “Hit the Quan” in July 2015. It sparked a viral song and dance craze, sending the single up to #15 on the Billboard Hot 100 and launching iHeartMemphis out of obscurity.

The song was created in tribute to Atlanta rapper Rich Homie Quan and his music video for “Flex (Ooh, Ooh, Ooh).” Rich Homie Quan popularized a series of gyrating, low-stepping, arm-swinging dance movements in the video and in live performances—what iHeartMemphis refers to as the Quan. The phrase hit the quan essentially means “do the same dance moves as Rich Homie Quan.”

The expression hit the quan reached peak popularity in fall 2015. And, it continues to appear on social-media feeds as another example of on-trend phrases inspired by popular dance moves (e.g., watch me whip).

Examples of Hit the Quan

If this gets 100 likes I will hit the quan.
Toonlink421, SoundCloud, February 2017
Sorry I’m late boss i was trying to ‘hit the quan’ on my way to work this morning and ran my vespa into a fire hydrant.
@poppagorilla, January 2018
Memphis's WMC Action News 5's morning team is pretty baller. The (almost) all-women anchor and reporting team showed the world how to 'Hit the Quan' in their latest viral video.
Laura Beck, Cosmopolitan, August 2015
SEE MORE EXAMPLES

Who uses Hit the Quan?

The slang expression is primarily used by youth in reference to the song and dance, but people of all ages and backgrounds—from 5-year-olds to The Rock—have uploaded videos showing their own interpretations of hitting the quan.

In 2015, Kansas City Chiefs’ tight end Travis Kelce hit the quan so well after a touchdown catch that a viewer watching the game sent in a complaint: “Do you really want your mother seeing you hump the air?”

As with other viral trends, hit the quan became the source of joking memes and wordplay online.

This is not meant to be a formal definition of Hit the Quan like most terms we define on Dictionary.com, but is rather an informal word summary that hopefully touches upon the key aspects of the meaning and usage of Hit the Quan that will help our users expand their word mastery.