Hobknocker is, originally, a piece of construction equipment similar to a jackhammer, but people sometimes use it as an insult … because it sounds dirty.

Where does hobknocker come from? 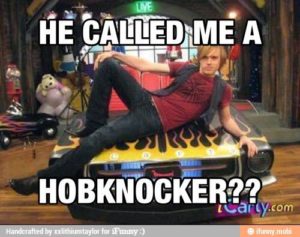 The hobknocker is a construction tool invented in the mid-1960s. It is used in the demolition of buildings, among other uses. The name itself is possibly a reference to someone who would knock hobs (the nails used to hold boots together) back in the day, hence a hobknocker.

Hobknocker was picked up as British slang, where it became an occasional general term of abuse or contempt (e.g., What a hobknocker!). In British English, a hob also refers to the range on a stove, and knockers is of course slang for “breasts.” The word also sounds close to knob, British slang for “penis.” All of this lends hobknocker a funny- and dirty-sounding suggestiveness. 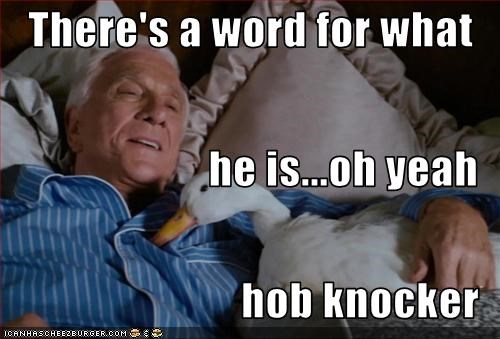 Hobknocker is an infrequent insult, even in the UK. But, it had its moment in the sun when a British character, Wade Collins (Alex Schemmer), on the popular Nickelodeon show iCarly used hobknocker as his go-to insult. After he used it on a February 2009 episode of the show, worried American parents turned to Google to look up what this suspicious word meant, causing a spike in interest. The word hobknockers was actually cut from the UK airing of this episode because of the possible controversy.

This is the man (the hobknocker) that is really behind ihob, I think he is finally making us rue the day pic.twitter.com/hfGUdwQlRt

Folk etymologists, responding to the newfound interest in hobknocker, came up with their own meanings of this obscure word. In February 2009, multiple definitions of hobknocker were submitted including “one who masturbates in public restrooms” and “to hit someone in the face with a penis.” These definitions appear to have been made up, but there’s no doubt hobknocker sounds like it should be a dirty word.

pbs.twimg.com
Kevin is an asshole hobknocker, numb nut who doesn't wave back
@_FLETCHERC, February, 2016
some old man just pointed to my phone and said “take your nose outta there and read a book!” and hobbled away cackling like ok reginald take the plug out of your life support and climb the six foot ladder you fucking hobknocker
@actionjxckson, March, 2018
SEE MORE EXAMPLES

Hobknocker is far less rude than asshole or dickface, but it’s still harsher than dummy and PG-enough to air on Nickelodeon.

Despite its 15 minutes of fame on iCarly, hobknocker remains rarely but creatively used, probably contributing to the confusion over what it might mean and inviting fanciful definitions.

I thought hobknocker meant someone who has sex with animals? Sam kept saying it was illegal. Either way it is disgusting.

Outside of the UK, hobknocker is most popular in British Commonwealth countries. In Australia, hob knocker is said as an occasional slang equivalent to humdinger (e.g., That was one hob knocker of a party).

This is not meant to be a formal definition of hobknocker like most terms we define on Dictionary.com, but is rather an informal word summary that hopefully touches upon the key aspects of the meaning and usage of hobknocker that will help our users expand their word mastery.