What does hosehead mean?

A hosehead or hoser is a derogatory slang term for an “idiot” or “loser,” especially stereotyped as Canadian beer-drinking bumpkins.

Where does hosehead come from? 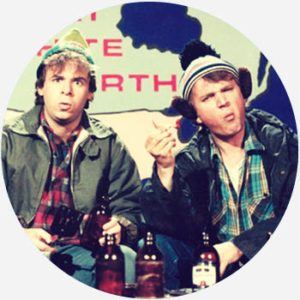 Although its exact origins aren’t certain, hosehead appears to originate as a variation on the Canadian slang term, hoser. As the Dictionary of Canadianisms on Historical Principles colorfully defines it, a hoser “refers to the type of Canadian young men who wear toques and flannel shirts while drinking beer and conducting inane conversations.”

There are two popular theories about how Canadians may have come to use the expression. One story goes that hoser was first used when Canadians would play ice hockey on local ponds, with the losing team having to hose down the pond with water to make sure that the icy surface was smooth for the next game. Thus, the “losers” become the “hosers.” The other story claims that the term was originally used to describe Canadian farmers back in the Great Depression who would steal gasoline by siphoning it out of other people’s farming equipment with a hose. These thieves, as it’s said, were considered boorish and dim-witted, hence “idiots.”

Whatever its precise origins, hoser hit the mainstream in the 1980s when Canadian comedians Rick Moranis and Dave Thomas played unintelligent, beer-swilling Canadian brothers Bob and Doug McKenzie on the sketch comedy show SCTV. The pair often repeated the phrase “Take off, Hoser!” The first known written example of the phrase was in a 1981 Toronto Star article about these characters. The antics of the McKenzie brothers were eventually spun off into the movie Strange Brew. In this film, the brothers own a dog named Hosehead, which may have helped along variation of the slang term. However, –head is used to intensify and personalize many slang insults, e.g. butthead, and hosehead may ultimately also just be following this lexical pattern. It’s worth noting, too, that slang lexicographer Jonathon Green cites hosehead as originating in 1980s US university slang for a “stupid person,” perhaps as influenced by Moranis and Thomas’ popular hoser sketch.

In Canada, there is a subgenre of films known as Hoser films, which center around an oblivious, childlike, unmotivated male loser who is attempting to navigate through the real world, while failing to understand the proper social norms or rules of it and not realizing or understanding his own failure.

“The photo above exemplifies the difference between a sophisticated Brit and a hosehead Canadian.”
Geek Advrider (April 11, 2012)
“he's the next President show some respect you hosehead, baby seal killing, hockey goon loving Canuck!”
@JiffySpiff Twitter (March 30, 2017)
“Because of Moranis and Thomas’ lampooning of Canadian culture, 'hoser' lives on in popular vocabulary—though you’ll probably be hard-pressed to hear any actual Canadians use the term. But I know what I’d say to them: ‘Take off, you hoser!’”
Sean Hutchinson, “Where Does the Word 'Hoser' Come From?” Mental Floss (July 1, 2016)
SEE MORE EXAMPLES

Hosehead and hoser are as much, if not more so, used to mock Canadians than they are used as slang by Canadians. For instance, in the American Transformers franchise, Hosehead is the name of an autobot, colored red and white like the Canadian flag, and who has been depicted as speaking in many stereotypic Canadian-isms like eh—and including the robot’s very name. However, as Moranis and Thomas’ famous sketch suggests, the mockery of hosehead and hoser include Canadians and non-Canadians alike.

In any case, whether hosehead or hoser, the slang is not a term that anyone wants to be identified as. Though sometimes used in a roughly affectionate manner between fellow Canadians, a non-Canadian uses it as a way to point someone out as a bumbling, clueless loser, who most likely drinks too much alcohol. (Getting hosed is indeed a slang way to say “getting drunk,” though the term is likely unrelated to the Canadian hoser.)

While hoser can be used humorously, hosehead is often used as a slur for Canadians.

A separate, unrelated meaning for the term hosehead is used by people diagnosed with sleep apnea. This use of hosehead stems from the fact that some sleep apnea sufferers use a special ventilator tube to help them breathe when they sleep, hence hosehead.

Be mindful, finally, that hoser is separate from Hoosier, a similar-sounding term that refers to a resident of Indiana.

This is not meant to be a formal definition of hosehead like most terms we define on Dictionary.com, but is rather an informal word summary that hopefully touches upon the key aspects of the meaning and usage of hosehead that will help our users expand their word mastery.