What does hotep mean?

Hotep is used as a greeting among many Afrocentrists. Afrocentrists themselves are sometimes called hoteps, usually derisively.

Where does hotep come from? 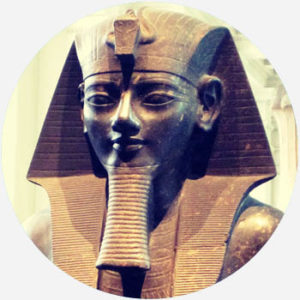 Hotep comes from an ancient Egyptian word that means “peace” or “contentment.” The names of several figures in Egyptian history contain the word, including Amenhotep and Imhotep. According to Dr. Molefi Kete Asante, Temple University’s Chair of African American Studies, hotep has been used as a greeting among some back people since at least the 1970s. Reporter D.L. Chandler recalled hearing the greeting in the 1980s. A letter to the editor of The Black Collegian in 1990 used the greeting hotep.

In particular, hotep is used as a greeting by adherents of Afrocentrism, a movement that looks to African history to inform values for the black diaspora. Afrocentrists often look to Ancient Egypt as the source of African culture, hence the adoption of the Egyptian term hotep.

Eventually, critics began to use hotep as an insult. One blogger referred to Stokely Carmichael, Martin Luther King Jr., and Malcolm X (who were not Afrocentrists specifically) along with Afrocentrists as Hoteps while comparing their respective economic ideas unfavorably to those of economist Thomas Sowell.

The term came to be associated with a subset of black Twitter users. A 2014 post on The Visibility Project described how to identify members of “Hotep Twitter,” characterizing them as being misogynistic and homophobic despite taking a strong stance on social issues related to race. The gossip site Bossip characterized Hotep Twitter in similar terms in 2015. Damon Young of The Root has frequently written to criticize those he considers hoteps, sometimes naming specific public figures. Young tends to focus on Afrocentrists who believe conspiracy theories. In a 2016 episode of the HBO comedy series Insecure, a character laments that men she meets all seem to be hoteps.

Some figures online have embraced the title of hotep, calling themselves, for example Uncle Hotep and Hotep Jesus. There is also a website titled Hotep Nation.

I’m soooooo so so so tired of hotep art niggas who think being pro-Black means fetishizing dark skin titties....
@lohanbelike, March, 2018
It was a Hotep hoedown, or a Hotep smackdown—straight WWE-style—when Dr. Umar Johnson, aka the Prince of Pan-Africanism, waded deep in the petty waters and posted a full 45-minute video rant against former conscious comrade General Seti.
Stephen A. Crockett Jr., The Root, December, 2016
It is time for us to re-establish Pan-Africanism in a modern context. Whether through travel, the exchange of ideas, creative collaborations, technology, or innovation — going back to Africa and re-establishing our bonds is no longer the realm of the “Hotep”.
Cherae Robinson, Africa.com, February, 2018
SEE MORE EXAMPLES

As noted, hotep is used as a greeting and self-identifier among some Afrocentrists.

Use of hotep as an insult has been criticized for being overly broad. In a Medium post, D.L. Chandler acknowledged that there are Afrocentrists engaging in misogyny online, but argues that hotep has been over-applied to Afrocentrists in general. Chandler suggests faux-tep and no-tep as terms that make this distinction clear.

Molefi Asante and C R Sparrow, a writer for Black Girl Nerds, have both argued that using hotep as an insult disparages African culture and dismisses valid elements of Afrocentric thought. Noted black blogger and author Joulezy, writing for The Root, responded to Sparrow’s critique, arguing that leaders of the Afrocentric movement espoused misogynist and homophobic views, and thus those elements cannot be easily separated from Afrocentrism as a whole.

This is not meant to be a formal definition of hotep like most terms we define on Dictionary.com, but is rather an informal word summary that hopefully touches upon the key aspects of the meaning and usage of hotep that will help our users expand their word mastery.