Feedback
hotep
how you doing

What does hot wife mean?

A hotwife is a married woman who has sexual relationships outside of her marriage, with the full knowledge and consent of her husband, who himself doesn’t have affairs.

Hotwifing is the wife-sharing arrangement or act of carrying out such affairs.

Where does hotwife come from? 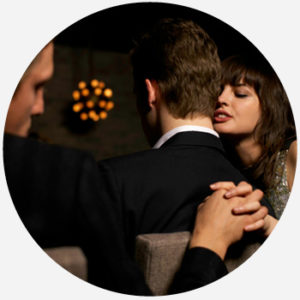 The idea of hotwifing comes from the concept of a husband showing off and sharing his “hot wife.” The non-monogamous arrangement is related to a cuckolding fetish, and many (but not all) husbands in such a relationship refer to themselves as cuckolds or hot-wifers.

The difference between hotwifing and cheating is consent: In a hotwife arrangement, the husband is fully aware and supportive of his wife’s affairs. In many cases, one spouse or the other even gains sexual arousal from the arrangement due to voyeurism, the thrill of doing something taboo, or an infidelity and/or jealousy fetish.

In some cases, there really aren’t any affairs taking place in hotwifing. For some, it’s mainly a foreplay exercise to talk through a hypothetical fantasy of infidelity.

The term first started showing up online in the mid-1990s, mostly among message boards for swingers and exhibitionists. The term spread in late 1997 in personal ads involving husbands wanting to show off their hot wives before further taking hold online.

So from a realistic practical point of view, a new hotwife first has to meet men socially because Hotwife dating is no different than dating for any non married woman.
Alexis McCall, Medium, August 2016
But hotwifing prioritizes a woman’s sexual freedom as a key component of her partner’s pleasure; her ‘openness’ is an end in itself, not part of a bargain.
Charlotte Shane, Mel Magazine, July 2016
So, I became his hotwife. Technically we weren’t married but he loved the term and used it with great affection. He actively encouraged me to have sexual contact with other men and then goad and humiliate him during sex using the experience.
Candy Snatch, Candy Snatch Reviews, March 2017
SEE MORE EXAMPLES

Online, there are also entire forums, websites, and at least one subreddit dedicated to hotwifing, where people come together to share stories and find community around the practice.

Given its explicit nature, hotwife may be considered vulgar or obscene.

This is not meant to be a formal definition of hotwife like most terms we define on Dictionary.com, but is rather an informal word summary that hopefully touches upon the key aspects of the meaning and usage of hotwife that will help our users expand their word mastery.