Feedback
ignant
in a jiffy

What does immoral minority mean?

Where does immoral minority come from? 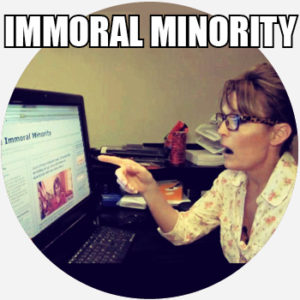 In 1836, New York Reverend Edward Kirk spoke of the necessity for Christianity to inform a “moral majority” of Americans. In 1877, a professor in Birmingham described how religious influence could bring about a “state of affairs where a moral majority control and keep in awe an immoral minority.” Both these speeches described civic life in terms of a large number of moral actors who must reign in a small number of immoral ones.

Along similar lines, the fundamentalist preacher Jerry Falwell co-founded an influential but polarizing political organization called the Moral Majority in 1979, known for distributing a “hit list of liberal candidates” during elections. In a speech given shortly after the group was founded, Falwell declared that the name was not intended to imply that those who disagreed with the group constituted an immoral minority. Still, some of Falwell’s opponents chose to adopt the immoral minority moniker. A 1984 issue of Ms. magazine advertised an “Official Member: Immoral Minority” t-shirt. In a 1987 biography, “Dear Abby” author Pauline Phillips referred to herself as a member of the immoral minority. Reportedly philosopher Ayn Rand discussed starting an organization called the Immoral Minority.

Opponents of Falwell and the Moral Majority also began to characterize that group as the Immoral Minority. The journal Human Sexuality published a paper titled “The Moral Majority: an Immoral Minority” in 1984. In the 1990s, critics expanded the immoral minority to include other, similar groups (Christian conservatives in general). The phrase has been used to critique Christian conservatives into the 2010s. Often these groups are characterized as bigoted (and therefore immoral), but more recent examples, especially since the election of Donald Trump with evangelical support, may focus on hypocrisy.

HB2 was passed by an immoral minority – North Carolina has many thriving, creative, modern communities.
Alex Ebert quoted by Daniel Kreps, Rolling Stone, May, 2016
Great breakdown on your show tonight! Couldn’t be clearer that the immoral minority is running our country....into the ground!
@sara_stipe, February, 2018
Once deemed the Moral Majority, white evangelicals are increasingly looking like they will be an immoral minority in the landscape of American politics. Backing alleged sexual predators and discriminatory policies, they are losing elections having already forfeited their souls.
Daniel José Camacho, The Guardian, December, 2017
SEE MORE EXAMPLES

Although people once self-deprecatingly referred to themselves as being in the immoral minority, now it is most often used in discourse and essays to criticize one’s opponents.

Immoral minority is most often used by liberal or left-leaning people to describe Christian conservatives, suggesting their behaviors are unchristian and their views are not in the majority. The phrase may also be used in earnest by conservatives to describe their opponents. In either case, it could be regarded as an insult or barbed rhetorical move.

This is not meant to be a formal definition of immoral minority like most terms we define on Dictionary.com, but is rather an informal word summary that hopefully touches upon the key aspects of the meaning and usage of immoral minority that will help our users expand their word mastery.