What does janky mean?

Janky is a slang term for something run down, of poor quality, or unreliable. It can also be used for someone considered undesirable in some way.

Where does janky come from? 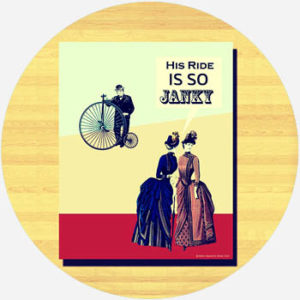 Janky first emerged in black slang in the 1990s, featured in rap songs as early as Ice Cube’s 1993 “Really Doe”: “Hard to swallow, janky as Rollo / Count to ten, and don’t try to follow.” Rollo may be a reference to Rollo Lawson, a recurring character on the 1970s sitcom Sanford and Son, who had a seedy reputation on the show. The Roots and Coolio also prominently featured janky in lyrics in 1993–94. It is unclear where the term originates, but hip-hop and black culture more generally helped popularize the term among various young people, and into the mainstream lexicon, in the 2000s.

The comedy film Janky Promoters was released in 2009, followed by the highest spike in Google searches for janky. In the movie, rappers Ice Cube and Mike Epps play two incompetent music promoters trying to find a way to pay for the artist Young Jeezy to headline their concert. Janky in the title refers not only to the inferior quality of the accommodations the promoters are able to provide their headliner (i.e., a rented van instead of a limousine) but also to their bumbling personalities and unprofessional management.

Rivers Cuomo has really nailed the look of a $7 Hallmark card with a janky broken speaker inside that plays 15 seconds of "Love Me Tender"
@josiahhughes, March, 2018
[Alicia Vikander is] awe-inspiring even when aided by far too much janky CGI, and that’s the thing — the story is essentially nonexistent and very silly, and a lot of the digital action is very sketchy.
Katie Walsh, Santa Maria Times, March, 2018
We’d wake up at 7:00 a.m. on Saturdays to pitch over 40 tents ourselves, sometimes in the pouring rain, sometimes in the sweltering heat...As the summer wore on, the tents broke left and right, the setup started to look janky as hell, and we were progressively more miserable.
Ali Kriegsman, Refinery29, September, 2017
SEE MORE EXAMPLES

Janky is still associated with Black English (cf. Janky Promoters), though its use is increasingly mainstream in colloquial speech and writing—a trend we see in a lot of terms originating in black slang thanks in part to hip-hop’s extensive influence on popular culture. Anything from fashion to doors to neighborhoods can be described as janky if seen as “crappy” or “sucky.”

Janky is a common word in technology, gaming circles, and media, too. When a new app, device, game, or movie premieres and doesn’t live up to high-performing expectations, critics use janky as a synonym for glitchy or buggy to describe it.

This is not meant to be a formal definition of janky like most terms we define on Dictionary.com, but is rather an informal word summary that hopefully touches upon the key aspects of the meaning and usage of janky that will help our users expand their word mastery.