What does Kiki mean?

A kiki is a social gathering, usually for the purpose of casually “kicking back,” gossiping, and sharing stories. It is historically connected to LGBTQ communities.

Alternatively, kiki is also the name of a ballroom drag subculture that celebrates gender nonconformity, racial diversity, and sexual openness.

If you were looking for the Kiki Challenge … you’re in the wrong place. Nobody at a kiki is in their feelings … at least not yet.

Where does Kiki come from? 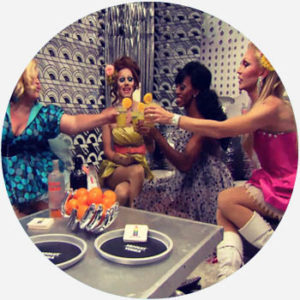 The word kiki has been long connected to the LGBTQ community, but its precise meaning has varied tremendously over the decades.

Meme maker
One of its first known uses was in the 1930s, when kiki was gay slang for a gay male who was comfortable being either passive or active during sex. By the 1940–1950s, kiki was extended to a gay woman who “switched” between the gender identities of “butch” or “fem,” or women who did not identify with either identity in the lesbian community. The historic uses of kiki, possibly derived as a play on queen or chi-chi, for role-bending in same-sex relationships may have informed or influenced later uses of kiki in drag culture.

Within the slang of drag shows, kiki came to mean having “a good time,” normally at a party or social occasion—particularly one that involves gossip. The word kiki was used to describe the sound of laughter in the 1990 documentary Paris is Burning, which depicted drag culture in 1980s New York. 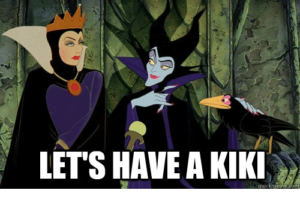 Kikis, or friendly social gatherings for the drag community, became a staple at health outreach organizations. Since then, the “kiki scene” has also rapidly grown out of the NY ballroom subculture. Unlike the more mainstream ballroom culture in drag, which caters to an older generation, the kiki scene is particularly welcoming to young Black/Latino members of the LGBTQ community. This movement was depicted in the 2016 film Kiki, which was an “unofficial sequel” to Paris is Burning.

In the 2010s, use of the term kiki has further broadened, with it now being used by all communities and demographics, even outside of the LGBTQ community. For example, mothers could have a “mom kiki,” just as a group of gay friends could also have a kiki after dinner. This growth is generally credited to the band the Scissor Sisters, who in 2012 released a song titled “Let’s have a Kiki.” The song’s lyrics actually define a kiki for those who weren’t aware of it, stating: “A kiki is a party, for calming all your nerves. We’re spilling tea and dishing just desserts one may deserve.”

💃🏽 Let's have a Kiki 💃🏽#ThrowbackThursday from the Scissor Sisters

We can't wait to have both @MsAnaMatronic and @jakeshears perform at The Big Weekend! pic.twitter.com/BbAtZdVdx5

Kiki is different from kaikai, which traditionally refers to two drag queens having sex with one another but can also mean intercourse between any two gay men. Naturally, a kiki can result in some kaikai happening as well, but the two terms aren’t interchangeable, though it does seem like the term kaikai grew out of kiki at some point.

Given the political climate, the LGBTQ community and their allies seem in desperate need of a kiki.
Owen Keehnen, Choose Chicago, June, 2017

Not to be confused with Drake’s Kiki Challenge … a kiki is just an event where people hang out to gossip, but the term kiki can also be used as a verb to describe what people do at a kiki. For example, one could say, “Let’s get together to kiki this Sunday.” However, kiki is often specifically applied to a group of gay men who are laughing and joking with each other.

I need my kids to stop calling ‘In My Feelings’ Kiki, cause ‘KEKE’ is something else entirely and when I think Kiki I think ‘Let’s Have a Kiki’ and none of those songs are actually appropriate for summer camp

While kiki is enjoying some greater use in the broader public with growing interest and acceptance of the drag culture, be sensitive to its original context and be wary of appropriation.

Kiki is also a female name, which has nothing to do with the phrase.

The English use of kiki can also be confused with the Spanish slang quiqui, pronounced similarly, which is a vulgar term for “having sex.”

This is not meant to be a formal definition of Kiki like most terms we define on Dictionary.com, but is rather an informal word summary that hopefully touches upon the key aspects of the meaning and usage of Kiki that will help our users expand their word mastery.