In Scottish slang, a laldy is a “beating” or “thrashing.” The expression to give it laldy means doing something with lots of energy and vigor, e.g., with gusto.

Where does laldy come from? 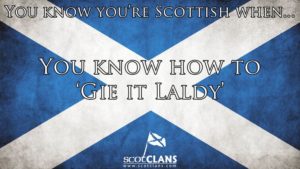 The word laldy comes from late 19th-century Scottish English. The origins of the word are somewhat uncertain. One source might be the Old English lael, “whip.” Another is that laldy is meant to sound like a whipping.

We're loving seeing all these Scottish Words on Twitter for #AneYinWan and #InternationalMotherLanguageDay!

We reckon 'Braw', 'Clarty' and 'Gie it laldy' sum up Scottish Scouting! Got any of your own faves? pic.twitter.com/vO2zMNdFmX

Laldy originally was a noun for “a beating.” One could get a laldy, meaning “get a beating,” or give (gie in Scottish) a laldy. It could also signify more generally “punishment” and was sometimes rhyming-reduplicated to laldy daldy.

At least by the 1950s, giving it laldy (or giein/geein it laldy, in Scottish) became a way to say “doing something with great energy or enjoyment,” e.g., The singer was giving it laldy all night.

Perhaps it’s not unlike the black slang going ham, or “doing something all out.”

The band's been givin it laldy aw night.
Michael Munro, The Original Patter, 1985
As an exile living in England, I still use Scots words, much to the natives confusion. If not used a language will die, so keep gaein it laldy
@greenhill_ian, November 2018 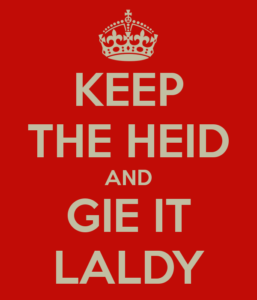 The original sense of laldy, a “beating,” may still be seen in Scottish English, but it’s more often found as an expression meaning  most commonly in the phrase giving it laldy. That expression is particularly associated with the slang of Glasgow.

It's rather busy, can't get to the front. I can hear you though, givin it laldy @AamerAnwar ✊🏽❤️💪🏼🏳️‍🌈#TrumpVisitUK #Glasgow #DumpTrump pic.twitter.com/dik3MJIGag

While giving it laldy can refer to doing anything with enthusiasm, from sports to politics, although it’s often used online for for “singing your heart out.” For example, the expression give it laldy appeared in Irvine Welsh’s 1993 Scotland-set novel Trainspotting, in which an old man is “giein it laldy” as he belts out tunes in a pub.

Trainspotting 2 orange hall scene, Ewan giving it laldy to "there were no Catholics left"😂 fukn place was in stitches. If only it were true

According to a 2015 article in The Scotsman, the newer slang word yaldi, which is used to express excitement, possibly comes from a take on or mispronunciation of laldy.

This is not meant to be a formal definition of laldy like most terms we define on Dictionary.com, but is rather an informal word summary that hopefully touches upon the key aspects of the meaning and usage of laldy that will help our users expand their word mastery.