What does male tears mean?

Male tears is a phrase and reaction image used by feminists for when men complain about reverse sexism, e.g., that they feel they have it hard when it comes to equal pay, discrimination, and harassment.

Where does male tears come from? 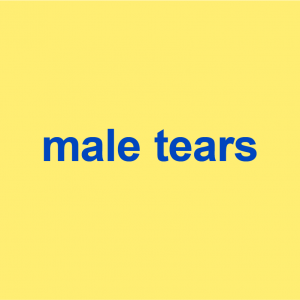 The phrase male tears emerged on Tumblr in 2012 on the blog Feminist Picture. In the post, the writer describes male tears as “a concept to make fun of men who complain about how oppressed they are, how difficult it is for them, when they are privileged.” Also that year on Tumblr, the blog Misandry began compiling macro images captioned with male tears, and the phrase only spread from there thanks to Tumblr’s reblog function. 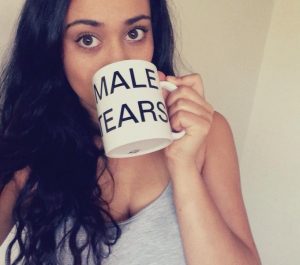 In July 2014, journalist Jessica Valenti tweeted a picture of herself posing in front of the ocean in a sweatshirt that read I Bathe in Male Tears. Upset at this, a number of men claimed—ironically enough—male tears was a sexist, man-hating phrase.

Time magazine, The HuffPost, Slate, and other popular publications all ran opinion pieces on the comic misandry of male tears in 2014. In response to a trend of people posing with coffee mugs with the phrase male tears printed on them (as if they were drinking male tears), one Twitter account posted an image of a woman sipping from a mug that read That Means Semen. Urban Dictionary confirms that, yes, male tears is also slang for semen.

We’re having a moment for male tears—no, not the kind that the popular feminist mug metaphorically collects in pursuit of bringing down the patriarchy. We’re talking literal tears that men shed in moments of televised vulnerability.

Elahe Izadi, The Washington Post, March 30, 2018
We first came for your Ghostbusters, and now we're coming for your James Bond. I am ready for my refreshing shower of White Male Tears. #WhoRunsTheWorld
@Selena_Adera, July 14, 2019
Eh, if you're going to be mean-spirited, it should be funny. You nailed that so I say carry on and drown us all in the toxic male tears.
@LoisBeans, August 9, 2020
SEE MORE EXAMPLES

Although some people might use it unironically and actually enjoy it when men cry, male tears is mostly used jokingly. The phrase or the reaction image can be posted in response to a man seen as whining on the internet, often to the amusement of some feminists when men express outrage over it. The phrase has been printed on all kinds of apparel and accessories, so it’s easy to proclaim to the world how you enjoy the male tears.

A couple of different variations of the tears concept exist, including white tears (for when white people complain about their privilege or are told they can’t use the N-word) and sipping on male tears, used with an ironic ruthlessness.

This is not meant to be a formal definition of male tears like most terms we define on Dictionary.com, but is rather an informal word summary that hopefully touches upon the key aspects of the meaning and usage of male tears that will help our users expand their word mastery.