Before the #MeToo movement took off in 2017, mancelled was sometimes used to refer to dudes being flakey and cancelling their plans. In the post-#MeToo era, problematic or offensive men can expect to get mancelled, a blend of man and cancelled, i.e., shunned.

Where does mancelled come from? 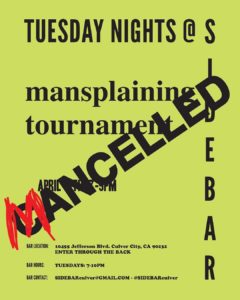 Before the #MeToo movement went viral, getting mancelled wasn’t very controversial. It simply referred to when a guy, or a group of guys, flaked-out, canceling on existing plans.

A 2010 Urban Dictionary definition of mancellation describes it as when a guy cancels date plans with his girlfriend at the the last minute to go out with his friends. On Twitter, the term came to be used to refer to when guys cancel on any plans.

My plans to watch Knicks-Heat with another dude got mancelled.

In 2017, the #MeToo movement took off, with women speaking out more loudly against sexual violence and misogyny. In this context, getting mancelled took on a whole new meaning. Instead of plans being mancelled, people were—specifically, problematic men alleged to have histories of misconduct or sexual harassment or assault.

"We haven't mancelled men, we simply chose not to renew them for another season."

To be mancelled generally implies that someone should be denied a public platform–especially high-visibility roles like actors, politicians, musicians and the like.

Lunch with the boys got mancelled.
@GeauxCurt, February 2012
[Michael Avenatti] Mancelled 100% as a contender for POTUS for sure. Bummer 💔 for me because he’s so dang handsome when he talks tough.
@jdmoonchild, October 2018

Although the term mancelled is not widespread, it does occasionally appear as a hashtag on social media, particularly about men whose unsavory past has come to light.

An example can be seen in this comment about lawyer Michael Avenatti after his 2018 arrested on domestic violence charges.

Other commentators have snidely noted, in light of #MeToo, that men should be mancelled altogether.

Goodbye to all the men of last week – you’ve been #mancelled (hashtag credit: @instacais) #foundphotofriday

This is not meant to be a formal definition of mancelled like most terms we define on Dictionary.com, but is rather an informal word summary that hopefully touches upon the key aspects of the meaning and usage of mancelled that will help our users expand their word mastery.