What does mandem mean?

Mandem is UK slang for a group of men or people in general, like one’s crew, boys, or mates.

Where does mandem come from? 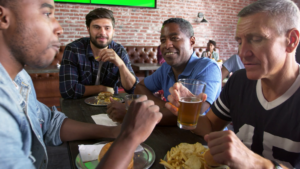 Mandem comes from the Caribbean English “man” and “them.” Recorded in the 2000s, mandem is associated with the Multicultural London English, especially common in the East End of London and among working-class youth.

British singer Jessie J—who used mandem in her 2010 song “Do It Like a Dude” (“We can do it like the mandem,” or boys)—explained the term in an interview with TV host Jonathan Ross, saying it’s a “street term” for the “boys you roll with.”

And they thought Carles had no mates! #Squad #Mandem #AVFC
@TheHolteTweets, July 2015
Just hit da road with the mandem, me and @hypafenn are headlining in Bournemouth Tonight!!!its gonna be crazy!!!
@MarciPhonix, October 2009
think it might have 2 b an orange wednesday trip to the cinema with the mandem..hold tite cineworld and all the other managers that hook it
@realadamdeacon, March 2011
SEE MORE EXAMPLES

Outside of its use in UK slang for “men,” mandem has made some prominent appearances in popular British culture.

And they thought Carles had no mates! #Squad #Mandem #AVFC pic.twitter.com/wjeRyzBuF2

Mandem was defined as a “group of men, typically gang members” in Polly Courtney’s 2013 Feral Youth, a novel set in South London.

Grime artist, Novelist, (Kojo Kankam) employed a more woke use of the term mandem in his 2018 song “Stop Killing the Mandem”:

This is not meant to be a formal definition of mandem like most terms we define on Dictionary.com, but is rather an informal word summary that hopefully touches upon the key aspects of the meaning and usage of mandem that will help our users expand their word mastery.