A meninist is someone who—wait for it—believes men are victimized by feminism and that attention needs to be called to what they believe are the struggles of being a man in the 21st century.

Where does meninist come from? 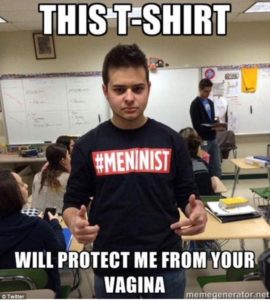 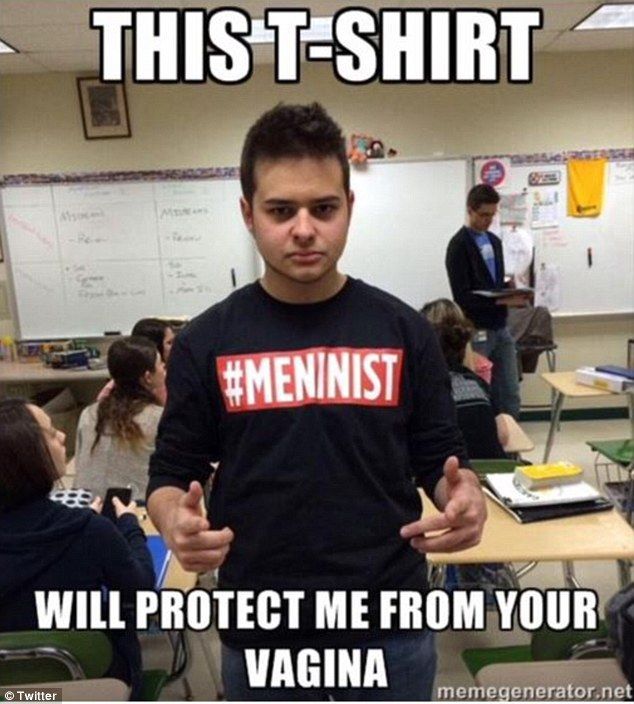 The original meninist surfaced on the website feminist.com in a 2001 manifesto announcing meninist to be a “new global organization of men that believes in a woman’s right for equality in society including political, social and especially in the workplace.” The group was founded by feminist.com founder Marianne Schnall’s husband, Tom Zatar Kay, as an online space where men who were feminists (hence meninists) could share ideas and experiences, and as part of that, members were invited to send letters to be posted on the site.

Kay’s conception of meninism, sadly, never quite took off. In 2013, a 28-year-old Ti Balogun started the “#MeninistTwitter” hashtag on Twitter to satirize, as he put it, “the way feminists express themselves, which is a turn-off.” While Balogun remorsefully admitted that “feminism has it’s place in society” and that “there are clearly women that are oppressed” in a 2013 interview with the HuffPost, the term meninism was quickly adopted by men who believed that they were victims of feminism.

Meninism doesn’t have an official manifesto, but generally speaking, there is significant overlap in beliefs many meninists hold and the views of other groups in the so-called manosphere. Meninists don’t necessarily go to the extreme that Men Go Their Own Way does in their belief that men should completely avoid contact with women. However, they do argue there are double standards against men, particularly when it comes to physical appearance and social etiquette.

While the term meninism may be realtively new, many of the ideas it stands for are not. In fact, starting in the 1970s, many men’s groups were created such as the National Coalition for Men, a large portion of which were established in response to second-wave feminism.

If she can cake on a ton of make-up and wear high heels, then I can tell her I own the rental I picked her up in. #MeninistTwitter #Meninist
@MattDonagangsta, 2013
I'm not a feminist or a meninist. I think humans are all stupid, regardless of gender, and should thus be ruled by alien cyborgs.
@WhitneyJael, December, 2013 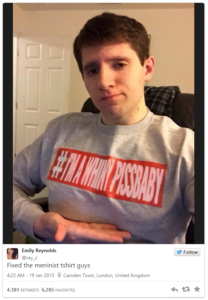 Know Your Meme
Dear Meninists: I speak to you today as more than a woman; I speak to you as an object (hopefully this makes me less intimidating). So far, you’ve done a wonderful job bringing attention to the great, unacknowledged plight of straight, white men. But, as with any movement, you’ve been met with resistance; people are branding you as radical meni-nazis left and right. While your mission remains an honorable one, the fact is that your movement’s public image needs a massive makeover.
Haniyah Burney, Meninists: Here Is Some Advice on How To Continue Your Honorable Mission, Affinity Magazine, 2017  http://affinitymagazine.us/2017/05/21/meninists-here-is-some-advice-on-how-to-continue-your-honorable-mission/
SEE MORE EXAMPLES

Many of those who feel they are victims use the term to point out what they believe are unfair body standards for men, a belief that falls closely in line with the central component of incels—that certain men are completely unable to find romantic relationships due to flaws in their physical appearance.

The term’s ironic users poke fun at what they believe is the ridiculousness of the concept and those who use it seriously, as it ignores a long history of female oppression as well as contemporary sexism and misogyny.

noticed a little typo in the new #meninist hoodies, so i thought i'd help out! pic.twitter.com/7E4NuEdC1b

This is not meant to be a formal definition of meninist like most terms we define on Dictionary.com, but is rather an informal word summary that hopefully touches upon the key aspects of the meaning and usage of meninist that will help our users expand their word mastery.