What does Milkshake Duck mean?

A Milkshake Duck is a person (or thing) who becomes extremely popular on the internet for some positive reason, but as their popularity takes off and people dig into their past, they quickly become an object of outrage and hatred.

Where does Milkshake Duck come from? 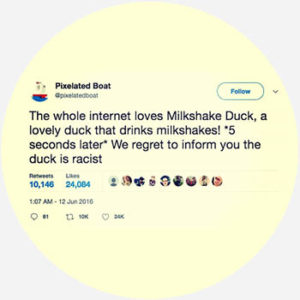 Milkshake Duck was conceived on June 12, 2016 in a tweet from Australian cartoonist Ben Ward. He wrote: “The whole internet loves Milkshake Duck, a lovely duck that drinks milkshakes! *5 seconds later* We regret to inform you the duck is racist”

This Twitter joke soon went viral with tens of thousands of retweets and likes. Milkshake Duck resonated with people so much because the tweet parodied a very real phenomenon that had until then been unnamed. This scenario immediately brings to mind Ken Bone. Bone and his bright red sweater gained unexpected fame after he asked a question to the US presidential candidates during a debate held October 2016. He immediately became an internet celebrity, but as past Reddit comments came to light, Bone’s fans soon turned on him.

In a June 8, 2017 episode of the podcast Reply All, host PJ Vogt introduces the term Milkshake Duck to his colleagues to help frame a situation in which a beloved Twitter account about dogs caused a segment of its followers to be upset when it got political. Suddenly former fans were sending hateful messages to the account they had loved with the same intensity only days before.

Vogt sums up why Milkshake Duck has become such a useful term to discuss the outrage cycle of the internet: “Before we were online, it took longer for people to disappoint you. And sometimes, maybe, they never did.”

Interest in this term was relatively flat until about a year after Ward’s tweet, and days after the Reply All episode was released. According to Google Trends, on June 11, 2017, Milkshake Duck spiked in lookups. This was due to a much-anticipated videogame called “The Last Night.” As more positive press came out about the game, a Twitter user dug up some old tweets from Tim Soret, one of the lead developers, which outed him as an outspoken Gamergate supporter. Suddenly the positive press for “The Last Night” shifted into a discussion of Soret’s controversial politics.

“Chelsea Manning is the anti-Milkshake Duck, we already liked her and then she turned out 100x better than she needed to be.”
Otherkin Skywalker @SFtheWolf Twitter (June 9, 2017)
“...I think he did like kind of like a rare like double milkshake duck, like he like, milkshake ducked himself to the conservative side of the internet, then he milkshake ducked himself to the progressive side of the internet.”
PJ Vogt, “Fog of Covfefe,” Reply All (June 8, 2017)
“Tim Soret is one of the creators of a video game, ‘The Last Night,’ that had been highly anticipated ahead of the annual Electronic Entertainment Expo. As he rode a wave of positive press from the game’s reception, some past Twitter comments he had made that aligned him with Gamergate emerged. The story of an internet darling with a problematic past is classic Milkshake Duck.”
Jonah Engel Bromwich, “How a Joke Becomes a Meme: The Birth of ‘Milkshake Duck’,” New York Times (June 27, 2017)
SEE MORE EXAMPLES

Milkshake Duck is primarily used by those who are social media savvy and spend a lot of time immersed in internet culture. A Milkshake Duck doesn’t have to be a person, though it’s generally used to refer to a person. Sometimes it’s spelled with initial capital letters, but it often appears all lowercase.

This is not meant to be a formal definition of Milkshake Duck like most terms we define on Dictionary.com, but is rather an informal word summary that hopefully touches upon the key aspects of the meaning and usage of Milkshake Duck that will help our users expand their word mastery.