What does molon labe mean?

From the Greek for “come and take them,” molon labe is a slogan used to express defiance, and is frequently employed by gun-rights advocates in the US.

Where does molon labe come from? 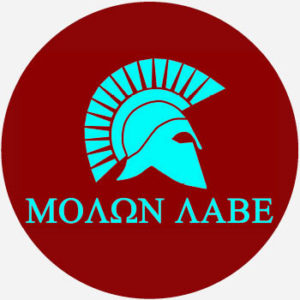 The expression molon labe comes from an account of the historic Battle of Thermopylae between Xerxes I, king of Persia, and Leonidas I, king of the Greek city-state Sparta, in 480 b.c.

According to the Greek biographer Plutarch in a collection of Spartan sayings, Xerxes demanded the Greeks surrender their weapons. Defiantly, Leonidas answered: “Molon labe,” roughly translating to “Come and take them.” While the Spartan leader staged a brave and noble resistance, Xerxes ultimately overpowered him. After the rest of his army retreated, Leonidas remained with 300 men, remembered in the comic and film 300, all of whom Xerxes slaughtered.

Since then, several modern fighters have notably referenced molon labe. During the American Revolution, American Colonel John McIntosh, refusing to surrender Fort Morris in Georgia, provoked the British commander: “Come and take it!” Texians, as they were called then, displayed “Come and take it” on its flag during the 19th-century Texas Revolution.

The Greek First Army Corps and the United States Special Operations Command Central both feature molon labe as their mottos. A statue commemorating Leonidas erected in Thermopylae in 1955 bears an inscription of molon labe in Greek script. Michigan State University athletic teams, whose mascot is the Spartan warrior, have also featured molon labe on their uniforms.

While molon labe has historically expressed daring in the face of overwhelming opposition, it has evolved to voice bold opposition to perceived oppression. During gun-control efforts starting in the early 21st century, molon labe spread among hardline US gun-rights advocates, some of whom believed the government was trying to restrict their Second Amendment rights to bear arms, and even confiscate their guns. As the Firing Line, an online firearms forum, explained their use of molon labe: “We have adopted this defiant utterance as a battle cry in our war against oppression.”

Molon labe spiked on Google Trends in January 2013, when Senator Dianne Feinstein introduced the later-defeated bill to ban assault weapons, one month after such guns were used to massacre 20 children and six adults at Sandy Hook Elementary School.

“Connecticut Gun owners tell cops 'Molon Labe.' Pretty much how the American Revolution began in 1774 with the British Cofiscation [sic] of Arms and Gunpowder. Guess the Tyrants will not learn.”
Phredex Reddit (March 10, 2014)
“Since libs want jihadists in our country Remove all gun free zones so #realAmericans can defend against terrorism #2A #MolonLabe #MAGA”
The-TRUMP-Republic @raun_estes Twitter (March 10, 2017)
“Like Charleton [sic] Heston’s famous ‘From my cold dead hands!’ speech, ‘Molon labe’ evokes the same Leonidas-like defiance against a supposedly tyrannical government intent on complete disarmament of its people.”
Baldr Odinson, ““Molon Labe” Was Uttered By An Arms-Controlling Tyrant,” New Trajectory
SEE MORE EXAMPLES

Many individuals get tattoos of molon labe, brandish the slogan on flags, clothing, and stickers, and engrave it on guns. Others incorporate molon labe into usernames and use it as a hashtag on social media. While the slogan signals passionate, sometimes provocative, support of broad gun rights and the Second Amendment, it can also communicate enthusiasm for firearms more generally. Molon labe often carries political overtones, with some currency among white nationalists online.

This is not meant to be a formal definition of molon labe like most terms we define on Dictionary.com, but is rather an informal word summary that hopefully touches upon the key aspects of the meaning and usage of molon labe that will help our users expand their word mastery.