Everything After Z by Dictionary.com
Previous Word: Mondaze
Next Word: moon crickets

Alternatives to "super": Mongo Awesome Superb Fantastic Phenomenal Excellent Huge Amazing Extra Incredible Beyond Unbelievable. +ly ifneed
@karrot_soup, January, 2013
wtf do u do when u fall over alone in public, Actually standing there talkin to myself abt how much of a mongo i am
@neveeferguson, March, 2018
Botha knows what he's talking about. When he moved from South Africa to Manhattan, he furnished his whole appartment with mongo.
Jane and Michael Stern, The New York Times, June, 2004

Where does mongo come from? 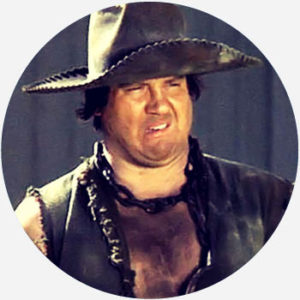 Used as a slur, mongo likely stems from Mongoloid, a term once applied to people with Down syndrome. John Langdon Down, the doctor who first classified his now-eponymous Down syndrome, called the genetic disorder Mongolian idiocy. In 1961, doctors proposed to the medical journal The Lancet that the condition be renamed Down syndrome. The World Health Organization endorsed this change, but some, even hospital staffers, continued to call people with Down syndrome mongol and mongoloid into the 1980s.

Green’s Dictionary of Slang records mong and mongo as insults, roughly equivalent to “idiot,” in the 1970s. Green’s also notes that Mongo is often used as the name of idiot henchman characters in film. The 1974 Mel Brooks comedy Blazing Saddles included an oafish character named Mongo, played by NFL player Alex Karras. While this Mongo may draw from the derogatory connotations of mongo, the nickname in the film is apparently a pun on Cuban percussionist Mongo Santamaria, for at one point in the film, a character sees Mongo and exclaims, “Mongo! Santa Maria!” Chicago Bears player Steve McMichael was nicknamed Mongo by his teammates, after the Blazing Saddles character.

According to Green’s, mongo came to mean “huge” in the 1980s and is probably clipped from humongous. The slang expanded to mean “excellent.” A 1996 travel guide to Latin America, for example, describes where to find “mongo bottles of Cerveza Regia” and “the mongo Cerron Grande mountain.” By the 1980s, mongo emerges among New York sanitation workers as a collective name for items picked from the trash. According to a 1984 article in the art journal Issue, sanitation workers furnished their workplaces by “mongo-picking.” The practice and the name eventually spread to other New Yorkers. In 2004, author Ted Botha wrote a book Mongo: Adventures in Trash, which explores the subculture of mongo–picking. The New York Times notably profiled a mongo-picker in 2006. The origin of the slang is obscure, though a variant of the term, mungo, is found by 1983.

Mongo and mong are still sometimes used as insults, similar to “idiot.” Many argue, however, that the use of the term is a slur to both Mongolians and people with Down syndrome.

In 2011, comedian Ricky Gervais was widely criticized for using mong as an insult. Although Gervais argued that the meaning of the word had shifted and he would never use it to describe a person with Down syndrome, a BBC America columnist compared Gervais’s mong to the use of retard as an insult. Gervais later apologized for using the term.

Mongo, for “huge,” can be an adjective (a mongo pay raise) or adverb (he was mongo drunk). It was more common among teens and college students in the 1990s. Mongolito, a term of endearment for a “buddy,” may be a mock Spanish embellishment of this mongo.

Mongo, meaning “salvaged trash,” is still primarily used in and associated with New York City. It can be used as a noun (“reclaimed discarded items”) or verb (“to pick such discarded items”).