What does no new friends mean?

No new friends is a motto coined by the hip-hop artist Drake, taken from the song of the same name. It describes the stance that someone is going to stick with the friends they already have. They don’t need #NoNewFriends.

Champagne Papi, In My Feelings Challenge, the 6, another one, friends with benefits, gurlfriend, best friend

Where does no new friends come from? 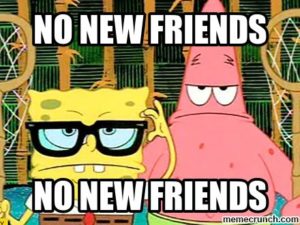 The expression no new friends was popularized by Drake on DJ Khaled’s song “No New Friends.” The song was released on April 19, 2013 and it peaked at #37 on the US Billboard Hot 100. In the hook of the song, Drake raps: “No new friends / Still here with my day-one niggas,” or his boys that have been there for him since the start.

Drake has hinted at this sentiment in his earlier songs, namely in his hit February 2013 “Started from the Bottom.” In it, he raps: “No new niggas, nigga, we don’t feel that. / Fuck a fake friend, where your real friends at?” The song is a tribute to the rapper’s humble-ish origins in Toronto.

Examples of no new friends

The struggle between making new friends in a town or just moving to a town you already have friends in 😂💀 #nonewfriends
@___Jey___, November 2018
I keep my circle small...I’m not one of those no-new-friends types. I’m like, ‘Okay, if you want to come to the table you have to bring something of value.’ You can’t just come to the table and start eating.
Israel Adesanya quoted by Tim Bissell, Bloody Elbow, November 2018 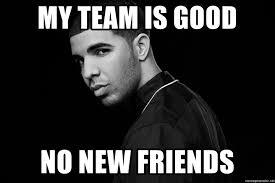 Who uses no new friends?

The idea behind no new friends is that you can’t trust fair-weather, bandwagon friends after you become successful; they might just like you for your fame or expect something from your wealth. Instead of making such new friends, some (including Drake) think it’s better to stay with the ones you already know you can trust.

If we’re not already friends then we never will be. No new friends 🗣

After the song’s release, the expression took off across the internet. According to Google Trends results, no new friends peaked in search interest shortly after the song came out in 2013.  It also spawned a related hashtag, #NoNewFriends, that people used for sharing their own feeling of solidarity with their existing homies—and their lack of interest in making new ones. Of course, internet irony ensued:

People still, however, take to the no new friends motto and hashtag on platforms like Twitter and Instagram. #NoNewFriends is particularly common on pictures and in comments about people expressing pride in…their friends.

Been told that my whole life. I’ve accepted it. My friends have been honest since day one. #nonewfriends https://t.co/Y6OwAGSPRp

And there might be something behind this no new friends business after all. According to social science research by anthropologist Robin Dunbar, people can really only have five close relationships at once. #NoNewFriends, indeed. 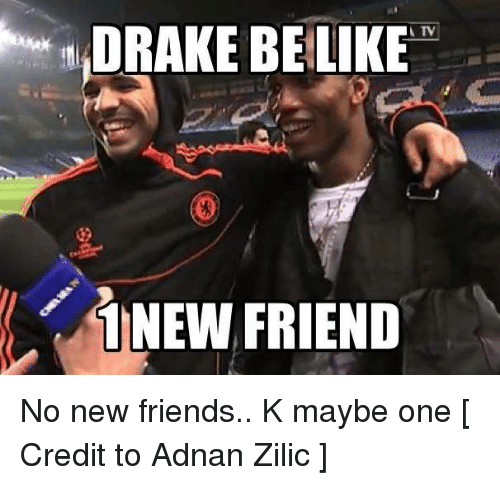 This is not meant to be a formal definition of no new friends like most terms we define on Dictionary.com, but is rather an informal word summary that hopefully touches upon the key aspects of the meaning and usage of no new friends that will help our users expand their word mastery.