What does nuggies mean?

Nuggies is an affectionate slang term for chicken nuggets. The term is associated with Baby Yoda memes.

Where does nuggies come from? 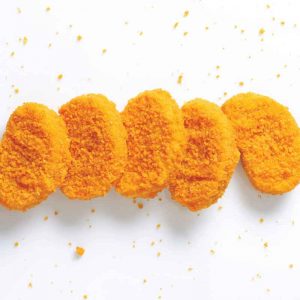 Nuggies is short for chicken nuggets, which are bite-sized pieces of chicken, usually batter-fried. Chicken nuggets are popular among children—and oh yeah, many adults. They are also commonly sold at fast-food restaurants.

The –ie in nuggie is a variant of –y, a suffix that can form diminutives (indicating smallness) and nicknames, among other things. In the term nuggies, the suffix has a cute, playful, or childish effect. Doggie, auntie, and sweetie are some other examples.

Want to dip chicken nuggets into some extra cuteness? Call them chicky nuggies or, to draw on the internet language of DoggoLingo, chimkn nuggies.

We can find nuggies as slang for chicken nuggets in the 2000s. There are many older, unrelated instances of nuggies, though, such as a variant form of noogie. (You know, like that unwelcome knuckle-rub thing you’re uncle always did to your head?)

While nuggies appeared in some so-called dank memes in the late 2010s, the term spread in 2019 with memes based on Baby Yoda, the popular name for the adorable character in the Star Wars TV show The Mandalorian. Nuggies was apparently imagined as a cute, baby-talk way Baby Yoda would refer to chicken nuggets.

One popular riff (from December 2019) on nuggies combined the Baby Yoda meme with another meme based on a scene (featuring Adam Driver) from the 2019 film Marriage Story. 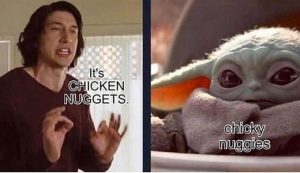 I'm in a weird place recently. / Please send chicken nuggies and memes. Thank you.
@Grimmerstv, February 2020
Normally I wait until 12 on the dot to scurry over for Leon chicken nuggies as I’m not really a breakfast food kind of gal.
Louise Whitbread, HuffPost (UK), July 2018

Online, many people use nuggies is a fun and deliberately cutesy way to talk about chicken nuggets—especially how much they can’t resist eating them.

Here’s a drive thru corgi. There were only 9 chicken nuggies in her 10-piece meal so she pulled around again. Please hand over the final nuggie this instant. 12/10 pic.twitter.com/WC7SKVjoep

Nuggies joins other food terms that have been intentionally cutesy terms for foods associated with children, including choccy milk (chocolate milk), chicken tendies (chicken tenders), and maccy cheese (macaroni and cheese). Plus, nuggies fits in with the broader trend online of deliberately misspelling words for playful effect, like chonky and smol.

On my way to get some nuggies, macky-cheese and choccy milk pic.twitter.com/Ijw1aR7C8d

While nuggies has appeared in a variety of memes, the term is especially associated with Baby Yoda memes from early 2020.

I’ve not seen the new Star Wars, nor do I plan to. But what I do know is that my favourite part is when Baby Yoda says ‘Chicky Nuggies’ pic.twitter.com/QWr2pMVS3i

This is not meant to be a formal definition of nuggies like most terms we define on Dictionary.com, but is rather an informal word summary that hopefully touches upon the key aspects of the meaning and usage of nuggies that will help our users expand their word mastery.