Oxycotton is a slang way to refer to the drug oxycodone, a pain-reliever known for its addictive qualities and abuse.

Where does oxycotton come from? 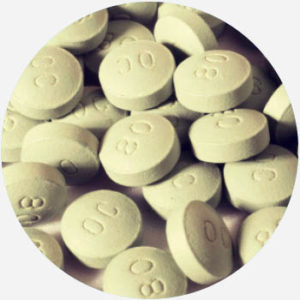 Oxycodone is a prescription pain-reliever that comes in an immediate-release form, generically referred to as oxycodone, and, in an extended-release form sold under the brand name OxyContin, which was introduced by Purdue Pharma in 1996. The pharmaceutical is considered an opiate, with high potential for abuse and addiction if not taken as prescribed. Starting in the 1990s in the US, prescriptions and black markets of pain medicines, including oxycodone, skyrocketed, leading to widespread abuse and addiction in a crisis now known as the Opioid Epidemic.

As early as 2001, popular medical resource website WebMD reported on the growth of illicit oxycodone sales, black markets, and addictions, noting that the drug’s name “on the street” was oxycotton. The WebMD article appeared at about the same time that the phrase oxycotton emerges on internet message boards. Oxycotton appears to originate as a mispronunciation of OxyContin, remodeled to the more familiar-sounding oxycotton in colloquial speech and then writing. The cotton may additionally allude to the narcotic effects of the drug.

Use of the phrase oxycotton was probably popularized in 2003, when rapper Lil Wyte released the song “Oxy Cotton,” featuring lyrics about prescription drug abuse. Google Trends shows that search interest in oxycotton peaked in 2007, when the makers of OxyContin pleaded guilty to misleading the public about the addiction risks of their drug and agreed to pay out an over-$600-million fine.

The devils in the oxycotton.
@LONDONSAMUELS1, December, 2015
And after we brought him home, he refused all Oxycotton! Good for him! Tylenol was entirely sufficient.
@SilenceDOGood47, March, 2018
Taking large quantities of Oxycotton depending on your pain severity can pose a lot of negative impacts to your body.
Recovery Concepts, February, 2017
SEE MORE EXAMPLES

Oxycotton is not a term used by medical professionals, though it is a very common mispronunciation and misspelling of OxyContin in the public. Medical professionals do, however, sometimes shorten oxycodone to oxy (e.g., “After that surgery, I gave him a couple oxys.”). Oxy is also a shortening used in drug-dealing slang alongside oxycotton.

Outside of pharmaceutical, medical, and drug-dealing contexts, oxycotton, along with its formal counterparts, is frequently cited or criticized in discussions of Big Pharma and its influence on politics and public health.

This is not meant to be a formal definition of oxycotton like most terms we define on Dictionary.com, but is rather an informal word summary that hopefully touches upon the key aspects of the meaning and usage of oxycotton that will help our users expand their word mastery.