What does papi chulo mean?

In Latin-American Spanish slang, a papi chulo is an attractive man. While the term originally names a pimp, it has broadened to refer to a ladies’ man.

Where does papi chulo come from? 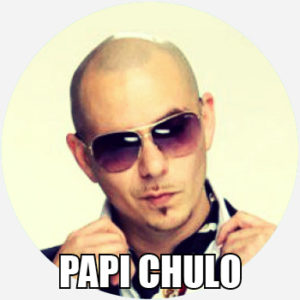 A direct translation of papi chulo from Spanish is “pimp daddy,” with papi being a diminutive form of “father” (and used like “baby”) and chulo meaning “pimp” but also “attractive,” “cocky,” or “cool” in colloquial settings.

Chulo alone has a storied history in American English. By the late 1980s, chulo was an insult, referring to an effeminate man or a pimp. In the 1990s, when Mexican-Americans were referred to as chulos, the term carried with it overtones of class—lower-income gangsters and recent immigrant laborers were insultingly referred to as chulos. Papi chulo carries some of these connotations along with it into contemporary use, though the term is more often used today as slang for a sexy, confident man who dresses well.

The phrase papi chulo gained popularity with the 2003 release of the single “Papi Chulo…Te Traigo El MMMM” by reggaeton artist Lorna. The song peaked at #25 on Billboard charts in the United States but reached #1 in France, #2 in Belgium and Italy, and #3 in the Netherlands. The lyrics describe the singer’s night out with a hot man on the dance floor. Singer Prince Royce released a 2015 track, “Back It Up,” featuring Jennifer Lopez, Pitbull, and the refrain: “Dámelo papi chulo,” or “Give it to me, papi chulo.” It debuted at #27 Billboard’s Hot Latin charts.

Oh fuck yes I'm waiting for bts to incorporate barely buttoned button downs in their suits I want that papi chulo look
@cherrycowgirl, February, 2018
[H]e walked around like he was some kind of Papi chulo—always trying to impress the ladies with his unbuttoned shirts and high-watered jeans. His dark hair was always nicely trimmed and clicked back. He was the only one who was into the club scene.
Johanna Cabral, With the Turn of a Silver Knob, 2014
You see papi chulos all over in Miami...We always have one actor or musician that defines Miami for a moment...In the '80s, it was Gloria Estefan, and it’s Pitbull now. Pitbull is Papi Chulo... It’s an important character in the Miami spectrum. He doesn’t know how ridiculous he is. He’s harmless. He’s never getting any play — he thinks he is, but he’s not.
Giancarlo Sabogal quoted by Minhae Shim Roth, Miami New Times, December, 2017
SEE MORE EXAMPLES

Papi chulo carries a variety of slang connotations depending on the region. But generally, calling someone papi chulo is in reference to their appearance and their confidence, either with a negative (Rico Suave) or positive connotation (a hunk).

Attitudes toward the term papi chulo are mixed among Latinx Americans, given chulo’s history as a derogatory, racialized term in American English. Though each individual will have a different view, there exists sufficient demand for self-identification as papi chulo for many online stores to sell t-shirts and other wearable items, even infant outfits with papi chulo written on them.

Young women who identify as Hispanic sometimes refer to their male partner or love interest as papi chulo in colloquial speech and writing, including on social media.

The Spanish plural of papi chulo is papis chulos, but papi chulos is commonly used as a plural in English.

This is not meant to be a formal definition of papi chulo like most terms we define on Dictionary.com, but is rather an informal word summary that hopefully touches upon the key aspects of the meaning and usage of papi chulo that will help our users expand their word mastery.