What does peace of mind mean?

Peace of mind is a mental state of calmness or tranquility, a freedom from worry and anxiety.

Where does peace of mind come from? 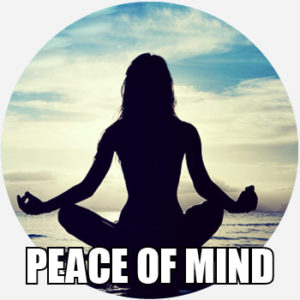 Written evidence for the phrase peace of mind dates as far back to the late 16th century, but earlier constructions precede that. Peace of heart is recorded as early as 1340 and peace of soul by 1425. Peace of mind, then, continues a well-established construction “peace of X,” where X names the part of a person in which peace is believed to be found.

Peace of mind prevailed over its older counterparts, perhaps in part due to the widespread location of stress and anxiety in the construct of the human mind. One of the most notable instances of peace of mind comes from Jonathan Swift’s 1726 satirical novel, Gulliver’s Travels. On one of his fantastical journeys, the narrator describes the Laputians (a caricature of aloof scientists) as never enjoying a minute’s peace of mind,” as they’re constantly concerned with things others never think about, like how the Earth will eventually be swallowed up by the sun. Other major English-language writers and thinkers have used the phrase too, from Swift’s contemporary Alexander Pope to Mary Wollstonecraft to D.H. Lawrence.

The meaning of peace of mind stayed relatively stable since its creation. It’s also remained fairly useful. As there’s always something to fret about, people regularly use peace of mind to label the feeling they are striving for—or have achieved. Anxiety in all forms is prevalent and according to the Anxiety and Depression Association of America, 18.1% of the adult population in US suffers from an anxiety disorder. Because of this, we might understand why peace of mind continues to enjoy wide currency, even if it may be ever lacking.

Examples of peace of mind

Over time, the peace of mind we’re searching for will emerge like the lotus flower from the murky waters below.
Robert Puff, Psychology Today, February, 2017
Maturity is learning to walk away from people & situations that threaten your peace of mind, self-respect, values, morals or self worth.
@Life0d, February, 2018
Peace of mind is good for health, good for community, good for family, and also for physical growth. A peaceful mind is more proper. A disturbed mind, harmful.
Dalai Lama, interviewed by Time, April, 2006
SEE MORE EXAMPLES

Who uses peace of mind?

Peace of mind is widely used in speech and writing across a range of registers and contexts to describe varying degrees of ease, assurance, and freedom from worry.

The phrase might also be used in response to a specific event or problem. As peace of mind is the opposite of anxiety, people often take measures to attain it and so speak and write of it in such terms. For example, in times of tragedy, people might look toward preventative measures to attain peace of mind, such as stationing extra security at venues and locations in the aftermath of a shooting. These traumatic events might ruin people’s peace of mind. Such a solution can give you peace of mind by preventing further anxiety about it.

Peace of mind also occurs in the context of meditation, where the goal is to reach a state that’s free of stress. The two are complementary, as the end result of meditation is often temporary or long-lasting peace of mind, as meditation involves the expulsion of thoughts, especially unhelpful ones. Therefore, working toward peace of mind typically involves a type of stress management, and the phrase is commonly used in mental-health and well-being contexts.

Peace of mind is well-ingrained in society, with people using it to urge others to do something. When advertising enrollment into Obamacare, then-president Barack Obama stated that “life [was] unpredictable,” urging people to enroll to “get some peace of mind.” When the Affordable Care Act was threatened, former Vice President Joe Biden urged representatives to “think of the peace of mind that this has brought to millions of people about to be ripped away.”

Because of its common usage in pop culture, many have played around with the spelling creating puns. Heavy metal rockers Iron Maiden titled a 1983 album Piece of Mind, suggesting the opposite of the original phrase: sanity. Head shops have named their stores Piece of Mind, with piece here meaning a device one smokes marijuana with.

This is not meant to be a formal definition of peace of mind like most terms we define on Dictionary.com, but is rather an informal word summary that hopefully touches upon the key aspects of the meaning and usage of peace of mind that will help our users expand their word mastery.