What does periodt mean?

A variant of period, periodt is an interjection used to signal the end of a discussion or to emphasize a point. It usually occurs at the end of a statement or in the phrase (and) that’s on periodt.

Where does periodt come from? 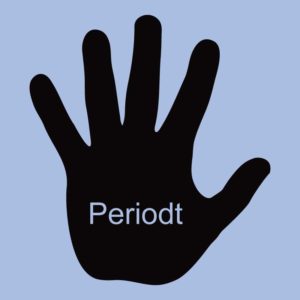 Periodt comes from period, used as an interjection to show a statement is final, that there is nothing else to be said or debated. Conversation over. No more discussion. For example: Cheating is wrong, period. Often, what period is emphasizing is positive: This the best meal I have ever had. Period. Full stop. Recorded since the early 1900s, this sense of period comes from the use of the period as a punctuation mark indicating the end of a statement.

Periodt, pronounced and spelled with a final T, is generally credited to Black English. It has been specifically attributed to Southern Black gay slang. The final T of periodt follows a pattern in Black English where a final D can become pronounced as a T or a form of one. (If you want to get technical, this is known as final obstruent devoicing or glottalization.) Fun fact: Irish English is known for rendering final D sounds as T’s, too. The T in periodt also fits in with internet slang, which often employs deliberate misspellings, e.g. thicc.

It’s hard to tell whether instances of periodt online dating from the early 2000s are intentional or typos. But periodt, deliberately spelled as such, definitely spreads in the 2010s. Really helping to spread periodt was the rap duo City Girls from Miami, Florida. They became closely associated with and helped popularize periodt (as well as the spelling period). Their 2018 song, “Period (We Live),” features the interjection period—popularly discussed as periodt—in its chorus, where it used to underscore their general awesomeness.

My choice for Best New Artist tonight is The City Girls "City Girls, there is nothing left to say. They changed the way we talked, from saying PERIODT and everything." Stay tuned into the #BETAWards Red Carpet Special now. pic.twitter.com/KsWzYyHMyC

Another notable moment for periodt came in September 2018 when, during a speech in southern Florida, Michelle Obama repeated periodt after a woman in the audience shouted it. Here, periodt was used to express strong agreement, sort of like “You can say that again!” Periodt spread into mainstream slang on social media in 2019, especially on and thanks to Black Twitter. Some discussions of periodt on popular websites consider its spread as a form of cultural appropriation.

had to put @MichelleObama on to the city girls #PERIODT #WhenWeAllVote pic.twitter.com/vIdYIMPTAq

i am bitter too, i am really upset too but i choose the right way to express it, periodt
@treasuredbts, June 2019
To bring the message home, Mrs. Obama dropped a "periodt" after hearing an audience member say the same thing.
Rachel Herron, BET, October 2018

Online, periodt is often used to cap off a strong opinion.

Don’t hmu if you have bad intentions with me . I ain’t interested PERIODT

Periodt is also used to emphasize—to add some feeling—to a point more generally.

Periodt also appears in the phrase (and) that’s on periodt. This is said or written as a comment used to emphasize a preceding statement. The phrase has the effect of saying something like “You better believe it” after making a point or observation.

I WAS CRAVING THESE SO MUCH AND ALSO ITS A PROVEN FACT NOT OPINION THAT THESE ARE THE BEST COOKIES EVER AND YOU CAN NOT TELL ME IM WRONG . THATS ON PERIODT.🥵🥵🥵😡😡😭😭😭😛😛 pic.twitter.com/AV0bXRbu2D

This is not meant to be a formal definition of periodt like most terms we define on Dictionary.com, but is rather an informal word summary that hopefully touches upon the key aspects of the meaning and usage of periodt that will help our users expand their word mastery.