What does phan mean?

Phan can variously refer to the ship name of popular British YouTubers Dan Howell and Phil Lester, a superfan of the band Phish, and a ceremonial tray used in Southeast Asian Buddhism.

Where does phan come from? 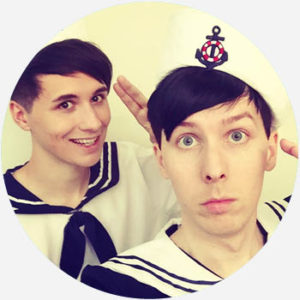 The Phan ship began in 2009, when fellow YouTubers Dan Howell (Danisnotonfire) and Phil Lester (Amazingphil) met online in the comment sections of Phil’s videos. The friendship between the two resulted in numerous joint projects, including making video playlists and working together as BBC Radio personalities.

Among their fans, Howell and Lester’s camaraderie prompted the formation of a ship—called Phan, blending Phil and Dan. Phan refers both to their platonic friendship and a hypothetical romantic relationship between the two. Phan was first named as such on LiveJournal in 2010, followed by Phan stories (Phanfiction) on popular fanfiction site Archive of Our Own in 2011 and on Tumblr. Phan shippers also have a notable history of “tinhatting,” or shippers believing in denied, unproven, or outright nonexistent romantic relationships of real people.

Since at least the 1990s, a phan is also a die-hard fan of the jam band, Phish. Known for extended sets and tours, an active concert-going culture, and a fun-loving, if drug-addled, attitude, Phish has a large network of phans who attempt to go to as many shows as possible. True Phish phandom is sometimes defined by people who have seen Phish play more than 100 times.

Finally, in Southeast Asia, a phan is the transliterated term for a kind of ritual tray, round and mounted on a pedestal, all usually made of light metals or wood. This phan is traditionally used in Buddhist ceremonies, such as the ordaining of Buddhist priests or the presentation of important items. They are commonly found in Cambodia, Laos, and Thailand.

After 2 hours, I finished this sketch. Daniel and Philip, happy boye’s [sic]. I tried my best. #danandphil #phan #phanart #danielhowell #AmazingPhil #roughsketch
@AgaluakNas, March, 2018
the phan trays are traditionally very important in thai culture. phans are generally used for ritual devotional practices and offerings may be placed on phans by the shrines. phans are also used for containing other highly important things.
Item description, Funky Stuff, 2018
I put my music on shuffle and wrote down the first 11 songs that played...These songs will be my Phan tunes for this work...There will be (a lot of) smut, fluff and angst...And I swear, everything gets better after "Untouchable"
phantasticjacky, Archive of Our Own, August, 2017
SEE MORE EXAMPLES

In social media, Phan is most widely used for shippers, usually female, of Dan Howell and Phil Lester. They often call themselves the phandom and identify as Dangirls or Philgirls, punning on fan-girl. Along with Phanfiction, the Phandom creates Phanart (fan-art).

In other social-media circles, though, a phan will refer to a superfan of Phish, often used in group discussions of live-concert set lists, bootleg tapes, and upcoming tour dates.

Phan is a common surname in Thailand and Vietnam, some well-known bearers of the name including YouTuber and makeup artist Michelle Phan, classical singer Nicholas Phan, and magician Nathan Phan.

Be mindful that PHAN may also be an acronym, such as the Public Health Association of Nebraska.

This is not meant to be a formal definition of phan like most terms we define on Dictionary.com, but is rather an informal word summary that hopefully touches upon the key aspects of the meaning and usage of phan that will help our users expand their word mastery.