What does pingers mean?

Pingers are tablets of the illegal drug MDMA, commonly known as ecstasy. The term is associated with Australian slang.

Where does pingers come from? 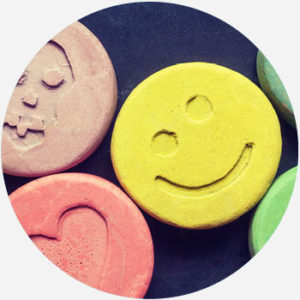 By 2012, an Australian guide for general medical professionals listed pingers among the street names for ecstasy, or MDMA, an illegal drug taken for its euphoric high and associated with rave parties. Around that same time, the term was spreading beyond Australia. Vice for example, picked up on its use in the UK in 2012.

The term pinger may be based on a pinging sensation users say they feel while on the drug or to describe a persons’s bouncy, jumpy behavior when high.

Mid 5-7am (sober) closing set at revs and some random bloke jumps on stage hands me a cup of water like I’m 8 pingers deep...ffs

I wonder how many people found out there was paint in their pingers, and took them anyway...😎😎😎

@Ausbooky, April, 2018
One artist who's used pingers to showcase his creative mind is Chemical X, the guy behind the original Ministry Of Sound logo. Then there's Zeus, the Londoner whose series Love Is A Drug sees him hand-mould pills, cast them in plaster and frames them. One guy, Scott Blake, has even created a self-portrait using images of rave beans.
Dave Turner, Mixmag, May, 2017
SEE MORE EXAMPLES

Use of the term pingers is still commonly associated with Australia and New Zealand, although it is sometimes seen or read in the UK and Ireland.

Among Australians (and others), pingers is usually pronounced more like pingas.

Pingers is most often used in the club, electronic dance music, and rave scenes as well as discussions about those cultures. Public-health resources may also warn people of the dangers, not to mention illegality, of using pingers, which has been connected to heart failure.

Someone high on pingers may be described as pinging.

Pingers should not be confused with Pinger, a free text messaging app.

This is not meant to be a formal definition of pingers like most terms we define on Dictionary.com, but is rather an informal word summary that hopefully touches upon the key aspects of the meaning and usage of pingers that will help our users expand their word mastery.