Feedback
plenty of fish
plugged in

What does plox mean?

Plox, or pl0x, is internet slang for “please.” It is often used to mock the writing of young, inexperienced, or obnoxious computer users.

Where does plox come from? 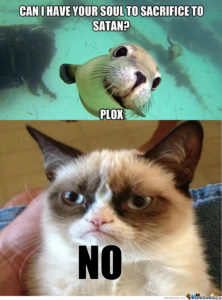 Plox comes from plx, a mistyping of plz that in turn is leetspeak shorthand meaning “please.” Leetspeak is an 1980–90s internet language known for shortening words and substituting numbers and special characters for letters, which is why plox is sometimes written as pl0x, with a zero for letter O.

In leetspeak, please was shortened to plz. On QWERTY keyboards, the Z and X buttons are next to each other, so plz became commonly mistyped as plx when typing large amounts of text quickly. Just as plz would be spoken aloud as please (pleez), plox comes from what pronouncing plx would likely be.

The misspelling plx was used, as far as more experienced leetspeakers were concerned, by poor typists or worse, those amateur n00bs. Plz, plx, and plox were commonly seen in early 2000s computer games like World of Warcraft. New (or annoying, to some) players would frequently request (or demand) assistance from other players with text like free items plz or help plox. The irritation of these queries gave plox the stigma that continues to haunt the word.

By the early days of social media in the 2000s, plox was already being used in requests to other users, though with a deliberately ironic, cute, or knowingly “old-school” internet twist.

Microsoft Outlook has decided to stop sending and receiving messages. Go ahead all you mac users laugh nao, I deserve it. But then help plox

I totally missed FCBD. I are sads. Send me free comics plox.

memecdn.com
Dear ESPN, can we watch the game, plox?
@LaMenta3, December, 2009
help plox
how do i get the broken war parts?ik from the sentients but do i need to do somethink or they have a very low chance to drop?
BallZeeX, Steam (Warframe discussion), November, 2016
SEE MORE EXAMPLES

Plox is still commonly used to mean “please” in requests from other users of social-media sites or other forums, especially for gaming.

I AM SICK
Send love and attention plox

I’m so stressed that I want to eat a whole pizza to myself. Someone send pizza plox.

It is also used when imitating the speech of new or annoying internet users, as the name of this YouTube video shows.

This is not meant to be a formal definition of plox like most terms we define on Dictionary.com, but is rather an informal word summary that hopefully touches upon the key aspects of the meaning and usage of plox that will help our users expand their word mastery.