What does Poe’s Law mean?

Poe’s Law is a popular adage that says satirical expressions of extremism online are hard to distinguish from genuine ones without indicating intent.

Where does Poe’s Law come from? 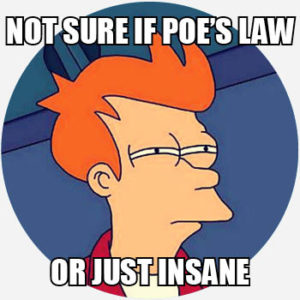 Poe’s Law is named after Nathan Poe, an agnostic user on the message board Christian Forums who posted in 2005: “POES LAW: Without a winking smiley or other blatant display of humor, it is uttrerly [sic] impossible to parody a Creationist in such a way that someone wont mistake for the genuine article.” In a thread debating creationism, Poe wrote this in response to a comment: “Good thing you included the winky. Otherwise people might think you are serious.”

With his self-styled law, Poe was arguing that some creationist viewpoints are so extreme that parodies of them, taking yet more extreme views, are easily taken as real creationist positions without a clear indication, like using a winky face emoticon, that a joke is being made. Poe was also commenting on the fact that sarcasm, irony, and humor don’t translate well online due to the lack of tone, facial expressions, and body language, and that emoticons are necessary to fill the gap.

The construction Poe’s Law alludes to a large body of eponymous adages like Murphy’s Law: “Anything that can go wrong, will go wrong.” A much-cited internet-based law is Godwin’s law: “As a Usenet discussion grows longer, the probability of a comparison involving Nazis or Hitler approaches 1.” These “laws,” of course, aren’t scientific as much as they are clever observations grounded in experience.

Poe’s observations about difficulty of sarcasm online isn’t new. In 1983, Usenet poster Jerry Schwarz observed how the laws of communication were different for online interactions. He issued a guideline for Usenet: “Avoid sarcasm and facetious remarks,” adding that comments will likely be misinterpreted unless there’s an emoticon to indicate that you’re joking. Poe’s Law helped crystallize and popularize this experience of online communication.

The first Urban Dictionary entry for Poe’s Law appeared in 2006, only one year after its introduction. It then received an article on a pseudoscience-debunking wiki, Rationalwiki, in 2007.

Since then, Poe’s Law has evolved to not only be a reference to managing sarcasm online but also a meta-commentary on extremist viewpoints. Though originally created to refer to creationists, the law has been applied to extremist viewpoints on atheism, capitalism, communism, environmentalism, feminism, and other hot-button topics. The point is that fundamentalist or dogmatic views can become so extreme, despite their acceptance, that even parodies of this views are unmistakable for the real thing, to the point that extremists may accidentally embrace a parody as truth. The converse can also be true; sometimes a person’s actual views are so extreme that another misinterprets these views as a parody. This is sometimes referred to as Poe’s Corollary, which was applied to Men Going Their Own Way, a group of men who swear off all interactions with women. Though some have believed the site to be a parody, it’s a genuine movement.

According to Google Trends, Poe’s Law peaked in 2014, right toward the beginning of the 2016 US presidential election cycle, though it has steadily grown in use since the early 2000s. A 2016-year-end Slate article argued there’s good reason for Poe’s Law’s growth in popularity, applying the law to cultural and political events (e.g., outrage over Harambe the Gorilla or the rise of the alt-right), extremist viewpoints that many, at first, believed were jokes.

Poe’s Law is similar to the so-called Harry Golden Rule, which says that it’s nearly impossible to dream up an event so bizarre or improbable that it can’t actually come to pass.

“Today I learned about Poe's law. It explains a lot of shit I've had to deal with.”
@Druidgeek Twitter (April 20, 2017)
“Poe's Law was a dark prophesy [sic] seen in the cauldron of the pale witch Ann Coulter.”
@VitruvianMonkey Twitter (April 16, 2017)
“So where do we go now? That other bit of classic internet fun, Poe’s Law—that it is impossible to create a parody so obvious that someone won’t mistake it for truth—is ascendent, with Facebook testing a ‘satire’ tag and White House Press Secretary Sean ‘President Trumble’ Spicer retweeting satirical news outlet The Onion’s pisstake of him by accident.”
Nicole Eckersley, “Has The Rise of Donald Trump Killed Godwin’s Law?” Junkee (February 10, 2017)
SEE MORE EXAMPLES

Poe’s Law is often invoked when one cannot tell if an argument being made is satirical or not. In addition to pointing out the necessity of using emoticons or emoji if one wants to mark tone online, Poe’s Law is also used to condemn ideas perceived as ridiculous, like those of people who believe Earth is flat.

Because Poe’s Law was first created during an argument against conservative creationist beliefs, some in the creationist community dismiss Poe’s Law as liberal bias.

This is not meant to be a formal definition of Poe’s Law like most terms we define on Dictionary.com, but is rather an informal word summary that hopefully touches upon the key aspects of the meaning and usage of Poe’s Law that will help our users expand their word mastery.