Currently, 17 percent of American homeowners have a smart video surveillance device, and unit sales are expected to double by 2023 ... The popularity of these devices has led to the “porch pirate gotcha” film genre, a sort of America’s Funniest Home Videos of petty crime.
Lauren Smiley, The Atlantic, November 2019
So it appears I was the victim of a porch pirate. U know lowlifes who see packages left in front of peoples houses. Roll up & steal em. Landlord has cameras in front of house. So gonna wait for him to come home to review footage. They stole cat food for homeless cats. Scumbags.
@KevZCastle, June 2019

Where does porch pirate come from? 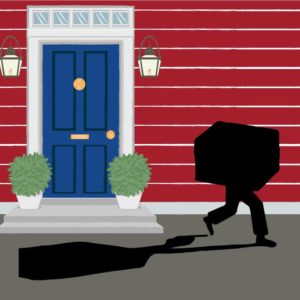 Not only do you have to worry about what gifts you’ll be giving to your loved ones, but you also have to make sure no one steals them from you. A porch pirate is someone that steals newly delivered packages from other people’s porches, hence the name. They often target larger packages, which may indicate a higher value item.

The phrase porch pirate dates back to the early 2010s. It was entered on Urban Dictionary in 2011 and debuted on Twitter in 2011. The term, and problem, spread in the decade as more and more people shopped online. The term was furthered by social media and local news reporting on the phenomenon—and as more people installed smart doorbells and cameras like Ring, which can provide video of activity around doorways.

Cities with a high economic disparity, such as San Francisco, are frequently reported to have more occurrences of porch pirate thefts than other cities. Other cities with high rates include metropolitan areas with dense populations, such as Austin, Baltimore, and Seattle.

Porch pirate talk spiked again in 2019 beginning at the end of November, with holiday sales around Black Friday and Cyber Monday.

Be on the lookout for this porch pirate pic.twitter.com/I07714ptdk

Porch pirate, as you probably guess, isn’t used kindly, for as clever as the term may be.

News outlets on TV and radio, especially local ones, report on porch pirates every year. These reports often include ways to prevent porch pirates from plundering your house. They also feature local porch pirates captured on video.

Nice surprise walking into work today… The Air Fryer I bought on Black Friday was delivered, can’t wait to try it out!

Oh & after all the porch pirate stories we’ve been doing, I heeded some advice I heard in one story and delivered it to the station haha! pic.twitter.com/aeMJv5XPiJ

With the spread of home security cameras and smart doorbells, many people have taken to exposing porch pirates on social media.