Everything After Z by Dictionary.com
Previous Word psychonaut
Next Word pump

What does puke mean?

Don't lose your lunch, but puke is an informal way to say vomit.

If a boy called me princess I’d puke in my mouth
@21alexandraaaa, May, 2018
Puke is pretty yucky. Luckily, most kids don't puke very often. And when you do, remember that you'll probably feel better very soon.
KidsHealth, September, 2017
puking in an Uber: $150 charge for damages, lowers your rating, not good puking on the metro: $0 charge, no rating, adds to the layer of puke already there
@Julian_Epp, March, 2018
SEE MORE EXAMPLES

Where does puke come from? 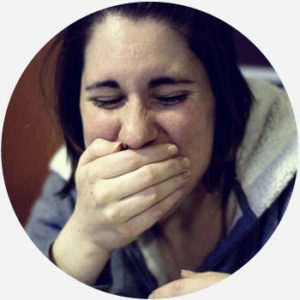 Puke as a verb is found in the 1580s, with the noun following not long after in the 1610s. Its etymology isn’t exactly clear, but it seems to be distantly related to another one of our many throw-up words, spew.

Shakespeare—ever the vomiter of words—notably used puke in his 1599 play As You Like It in one of the immortal passages of all the English language:

All the world’s a stage,
And all the men and women merely players;
They have their exits and their entrances,
And one man in his time plays many parts,
His acts being seven ages. At first, the infant,
Mewling and puking in the nurse’s arms.

Since then, the word puke really left its mark on the English language, used far and wide as a colorful way to talk about vomiting and vomit.

Puke has inspired many slang terms, especially for something or someone “obnoxious” or “contemptible” (e.g., you little puke or pukeface).

It especially figures in expressions that characterize how disgusting or repugnant somebody finds something. Holden Caulfield, for instance, memorably deployed it for his feelings about the word grand: “It’s phony. I could puke every time I hear it.”

The lowly word puke, though, isn’t just a favorite of high literature. The beloved character Chunk spills his guts about a puke prank in the 1985 cult classic,  The Goonies:

Other common occurrences of puke are in the phrases it makes me wanna puke (it’s so gross I could vomit), puke (a little bit) in my mouth (a more expressive reaction to something nasty), puke green or yellow (color), and puke and rally (frat-partying binge-drinker staple).

Any parent can tell you all about baby puke—and any cat owner, cat puke, as well.

The word puke has really gotten all over the place. It’s a noun, a verb, even an adjective, pukey.

Puke can refer to literal vomiting, but it just as often describes how something makes us feel.

While puke isn’t considered offensive, it may be considered impolite when people are eating. Vomit tends to be its more formal counterpart. If you’re classy like that.

This is not meant to be a formal definition of puke like most terms we define on Dictionary.com, but is rather an informal word summary that hopefully touches upon the key aspects of the meaning and usage of puke that will help our users expand their word mastery.